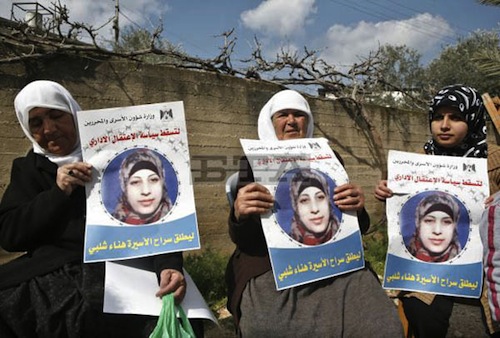 An independent United Nations human rights expert today urged Israel to release Hana Shalabi, a Palestinian woman prisoner who has been on a hunger strike for nearly a month. “The situation of Ms. Shalabi is morbid and life-threatening,”said Richard Falk, the Special Rapporteur on the situation of human rights in the occupied Palestinian territories. “This is an appeal to the conscience and to humanity and a desperate call to all of us.”

Mr. Falk urged the international community to intervene on her behalf. “Israel ought to end its inhumane treatment of Ms. Shalabi. Release her immediately.”

He noted that Ms. Shalabi’s hunger strike “is against Israel’s abusive use of detention without charges and the degrading and physically harsh treatment administered during her arrest, interrogation, and detention process.”

Ms. Shalabi was arrested on 16 February and has been on hunger strike since. “She is being held in solitary confinement. She has been treated inhumanely. In the presence of her family she was blindfolded and treated roughly by several of the 50 Israeli soldiers sent to arrest her, as was her brother who tried to protect her,” said Mr. Falk.

The expert voiced further concern that Ms. Shalabi’s 65-year-old mother and 67-year-old father also committed themselves to a hunger strike on 23 February.

He denounced the silence over Ms. Shalabi’s fate in Israel and the international community, and called on the Israeli authorities not to continue to disregard their responsibilities under international law.

“The abusive treatment of Palestinian prisoners by Israel remains a cause of grave concern and the international community must continue to raise its voice for those risking their own lives to end injustice,” said Mr. Falk.

Earlier this year, the independent expert twice appealed for the release of Palestinian prisoner Khader Adnan, who staged a 66-day hunger strike in protest of his humiliating detention and treatment by Israeli security forces. Israeli authorities have agreed to release him in mid-April. Mr. Falk said that Israel currently has approximately 300 Palestinians detained without charges.

“I have requested information regarding each of these persons,” he said. “I intend to follow up on each case and address this matter in my forthcoming report to the Human Rights Council.” There are also an estimated 4,400 Palestinian detainees in Israeli prisons, he added.