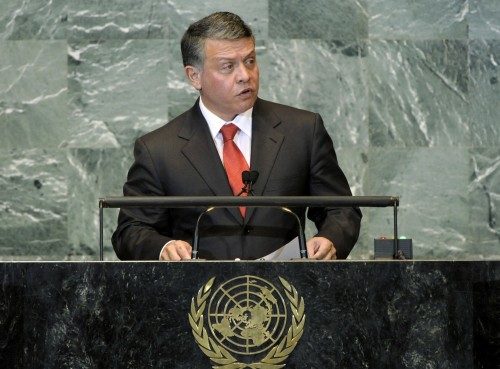 King Abdullah II of Jordan, whose country hosts to a large number of refugees from neighbouring countries facing political turmoil, expressed concerns on Wednesday about the implications of the Syrian crisis for the region.

“The window for a solution is narrowing and all should be on the alert to prevent the crisis from sliding into a civil war,” the king told daily Al-Hayat.

The comes amid a report that Jordan’s trade deficit widened 34.2 percent to 3.24 billion dinars ($4.56 bln) in the first quarter of this year against the same period in 2011, due to a higher bill for imported Saudi oil and other petroleum products, official data showed on Wednesday, according to Reuters.

According to the agency, data show that Jordan’s crude oil and petroleum products import bill in the first quarter of the year surged 63.7% compared to the same period last year to 1.81 billion dinars ($2.56 billion).Energy imports were almost 35.8% of total imports, the data showed.

Due to disruptions in cheap Egyptian oil, previously covered nearly 80% of Jordan’s electricity generation, the authorities have been forced to import more expensive fuel to run power plants.

The country’s Jordanian MPs recently voted for its suspension of its civilian nuclear prgramme amid fears that it would worsen the debt situation.

Jordan is faced with a trade and budget deficit for years which has deteriorated during the last year due to political turmoil in neighbouring Syria, as it constitutes one of its biggest trade partners.

Reports quoting government and UN officials in Amman said on Tuesday Jordan is ending its open door policy for Syrians amid rising false asylum claims, according to Arabian Gazette.

Alarmed by increasing violence in Syria, Jordanian border authorities have placed restrictions on Syrian refugees arriving through its airports and at the border shared with the restive city of Deraa.