Posted on: September 7th, 2016 by AlYunaniya Staff No Comments 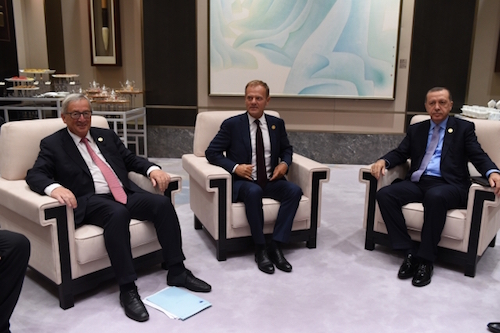 European Council President Donald Tusk and European Commission President Jean-Claude Juncker represented the EU at the 11th G20 summit in Hangzhou, China, on 4-5 September. The theme of this year’s summit was “Towards an innovative, invigorated, interconnected and inclusive world economy”.

On the migration and refugee crisis G20 leaders agreed on the need for global efforts to address the effects, protection needs and root causes of the crisis. They called for strengthening humanitarian assistance and refugee resettlement. At the press conference before the summit President Tusk stated that “In light of an unprecedented number of 65 million displaced people all over the world, the G20 community needs to scale up its share of responsibility. Only global efforts supporting refugees and their host communities will be able to bear fruit.”

On the fight against terrorism, leaders reaffirmed their solidarity and resolve and their commitment to tackle terrorist financing.

The summit also highlighted the importance of joining the Paris Agreement on climate change as soon as possible. Before the summit President Tusk recalled that “The G20 has an important role to play in this global struggle. With major emitters around the table we need to make sure that our common priority is to implement the Paris agreement early and in a robust manner. The EU is fully committed to this goal and we want to encourage all G20 members to do the same. ”

In the margins of the summit, Presidents Tusk and Juncker met with Recep Erdoğan, President of Turkey, to discuss EU-Turkey relations and continued cooperation on migration.