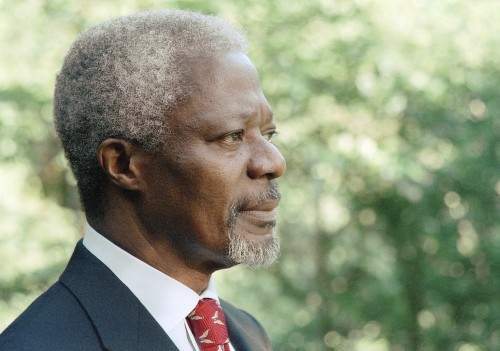 Kofi Annan, the UN-Arab League envoy, has arrived in the capital of Syria, Damascus, for talks with high-level officials, according to Syria’s State TV, as world leaders say his peace plan is the only way out of the country’s 15-month conflict.

Kofi Annan has called on “every individual with a gun” in Syria to put down arms, saying he was “horrified” by a weekend massacre that killed nearly 110 people, including 32 children under the age of 10.

He was to meet Walid al-Muallem, Syria’s foreign minister, on Monday before holding talks with President Bashar al-Assad on Tuesday, a Syrian official source said, according to AFP.

The mass killings in Houla, one of the deadliest attacks in the 15-month uprising has brought widespread international criticism of the Syrian regime.

The EU High Representative Catheirne Ashton strongly condemn the “heinous act perpetrated by the Syrian regime against its own civilian population”, despite the agreed ceasefire and presence of UN observers and also urge the members of the UN Security Council to remain seized of the matter.

Syria has strongly denied allegations that its forces carried out the killings, but the U.N. Security Council after an emergency session Sunday condemned government forces for shelling residential areas.

The violence of the killings, documented in amateur videos posted online on Youtube by activists showed scores of bodies, many of them young children, covered with blankets.

There are now more than 280 unarmed military observers in Syria to monitor a tenuous ceasefire which started on April 12.

Annan is to brief the Security Council on Wednesday on his efforts to end the syrian crisis.  The UN says more than 10,000 people have been killed in the uprising against Assad. It was Annan’s second visit to Syria since the start of his mission three months ago which was on March 10.