Kofi Annan “has questions and is seeking answers” 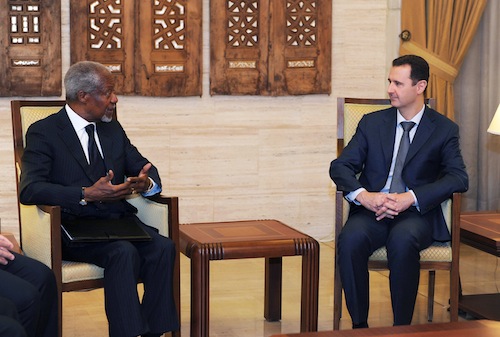 The Joint Special Envoy of the United Nations and the League of Arab States for Syria has received a response from the Syrian authorities on issues he raised when he visited the country to help find a peaceful solution to the ongoing violence, and is seeking further clarifications, his spokesperson said today.

Kofi Annan “has questions and is seeking answers,” said a statement issued by his spokesperson. “But given the grave and tragic situation on the ground, everyone must realize that time is of the essence,” it added. “As he said in the region, this crisis cannot be allowed to drag on.”

During his mission to Damascus, the Syrian capital, on Sunday, Mr. Annan urged President Bashar al-Assad to embrace change and reforms that will form the foundation for democracy in his country.

“The transformational winds blowing today cannot be long-resisted,” he said. “I have urged the President to heed the old African proverb: ‘you cannot turn the wind, so turn the sail.’ The realistic response is to embrace change and reform.”

He stressed that reforms would help build a “peaceful, stable, pluralistic and prosperous society, based on the rule of law and respect for human rights.” Discussions during the weekend meeting between Mr. Annan and Mr. Assad also focused on halting the violence, giving access to humanitarian agencies, and starting a political dialogue.

Thousands of people, mostly civilians, have been killed and tens of thousands displaced since the uprising – part of the broader Arab Spring movement across North Africa and the Middle East – began in March last year.

In a related development, the UN Food and Agriculture Organization (FAO) voiced serious concern over the availability of food in Syria, especially for vulnerable groups, as a result of the civil unrest in the country. FAO cited the figures from the Syrian Central Bureau of Statistics that show that inflation rose by about 15 per cent between June and December last year, driven mainly by sharp increases in food prices and fuel shortages that have had an impact on transportation costs.

The UN World Food Programme (WFP) estimates that about 1.4 million people have become food insecure since the unrest began, especially in hotspots such as Homs, Hama, Damascus, Dara’a and Idleb.

FAO and WFP are currently running an emergency operation providing food aid and vouchers to 100,000 people in Syria. Food, water and fuel are reportedly increasingly difficult to obtain in several areas and the situation is also affecting pastoralists, with reduced mobility for their herds and limited access to veterinary drugs and other supplies.

Some 300,000 small-scale farmers and herders in north-eastern provinces, which have already suffered four consecutive seasons of drought, are also affected by loss of opportunities from seasonal labour migration inside the country.

In addition, Syria’s cereal production is estimated to have dropped by almost 10 per cent last year following late and erratic rains, and the outlook for this year’s winter harvest, which starts in May, is uncertain given possible disruption of farm activities and limited access to inputs as a result of insecurity, according to FAO.