Libyans in front of first free elections in decades 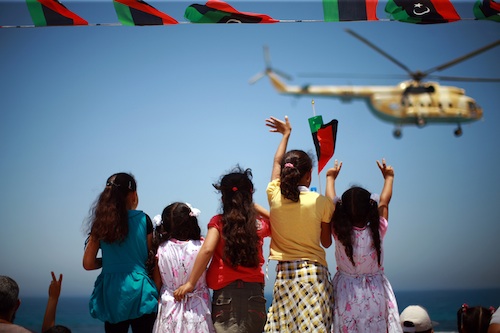 Ahead of Libya’s first free elections in decades this weekend, Secretary-General Ban Ki-moon yesterday saluted its people, and reaffirmed the support of the United Nations as the North African country progresses along the “road to democracy.”

“On Saturday, you will exercise a right that you have been denied for more than four decades, the right to vote, the right to elect a new National Congress – this is a milestone in Libya’s long march toward democracy,” Ban said in a video message. “The United Nations is proud to have assisted in the birth of an independent Libya. We will stand by you as you build a fully free and democratic state,” he added.

Some 2.7 million people in the North African nation have registered to vote for members of the new National Congress, which will be tasked with drafting a new constitution for Libya. More than 3,000 candidates are competing for office, including more than 600 women.

The polls, which were originally slated to be held in late June, will be the first free elections in decades in Libya, where Muammar al-Qadhafi ruled for more than 40 years until a pro-democracy uprising last year – similar to the protests in other countries in the Middle East and North Africa – led to civil war and the end of his regime.

“This is, truly, a moment for national celebration. We all know the road to democracy is long and hard. We share your aspiration for a peaceful and prosperous Libya founded on the principles of justice, human rights, inclusiveness and accountability,” Ban said.

The Secretary-General’s Special Representative and head of the UN Support Mission in Libya (UNSMIL), Ian Martin, has previously described the impending polls as “an important step in Libya’s road to recovery and democracy,” and as being one part of a process that requires addressing key issues in the country’s transition such as ensuring public security, promoting human rights, tackling arms proliferation and ensuring border security.

Meanwhile, Amnesty International warned that the country risks repeating the very violations that led to the “17 February revolution” unless the winners of elections make the establishment of the rule of law and respect for human rights their top priority.

In a report titled Libya: rule of law or rule of militias? the organization says that nearly a year after Tripoli fell to the revolutionary fighters ( thuwwar ), ongoing violations – including arbitrary arrests and detention, torture including to death, impunity for unlawful killings and forcible displacement – are casting a shadow over the country’s first national elections since the fall of al-Gaddafi’s regime.

During a visit to Libya in May and June, Amnesty International found that hundreds of armed militias continue to act above the law, many refusing to disarm or join the national army or police force. The Ministry of Interior told the organization that it has been able to dismantle four militias in Tripoli, a tiny proportion of the total number.

“It is deeply depressing that after so many months, the authorities have failed so comprehensively to break the stranglehold of the militias on Libyan security, with dramatic consequences for the people that bear the brunt of their actions,” said Hassiba Hadj Sahraoui, Amnesty International’s Middle East and North Africa Deputy Director.

“Calls for an end to repression and injustice were what led to the ‘17 February revolution’ in the first place. Without immediate action to stop abuses and lawlessness, there is a very real danger Libya could end up reproducing and entrenching the same patterns of violations we have seen over the past four decades”.