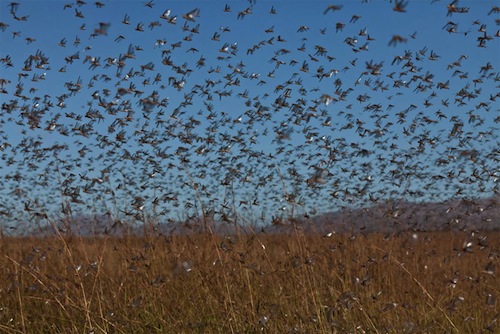 The United Nations Food and Agriculture Organization (FAO)  urgently appealed for $22 million to tackle the locust plague that has already infested over half of Madagascar’s cultivated land and pastures and threatens to trigger a severe food crisis in the island nation.

Funding is needed to start a large-scale control campaign in time for the next crop planting season in September, the agency stated in a news release, adding that its emergency appeals for Madagascar remain “severely underfunded.”

With the plague “largely uncontrolled”, FAO expects that two-thirds of the country will be infested by locusts by September. At stake are the food security and livelihoods of some 13 million people, or nearly 60 per cent of the population. Nine million of those people are directly dependent on agriculture for food and income.

“If we don’t act now, the plague could last years and cost hundreds of millions of dollars. This could very well be a last window of opportunity to avert an extended crisis,” said FAO Director-General José Graziano da Silva, who stressed that prevention and early action are key.

The agency pointed out that timely control of the locust upsurge in Madagascar at an early stage would have cost $14.5 million in 2011-2012. However, FAO only received half the necessary funding. Another campaign had to be launched, but that received barely a quarter of the required funds in 2011-2012, it added.

Funding will need to be allocated by July to have all the supplies and personnel in place to mount a wide-scale anti-locust campaign starting in September, FAO said.

“FAO’s locust control programme needs to be fully funded in order to monitor the locust situation throughout the whole contaminated area and to carry out well-targeted aerial control operations,” stated the agency.

“Otherwise, undetected or uncontrolled locust populations will continue to breed and produce more swarms. The plague would therefore last several years, controlling it will be lengthier and more expensive and it will severely affect food security, nutrition and livelihoods.”

The full programme that is needed to return the locust plague to a recession requires over $41.5 million over the next three years. The programme includes: improving the monitoring and analysis of the locust situation; large-scale aerial and ground spraying and related training; monitoring and mitigating the effect of control operations on health and the environment; and measuring the impact of anti-locust campaigns and the damages to crops and pasture.

A recent FAO assessment mission on the impact of the current locust plague in Madagascar found that rice and maize losses due to the locusts in some parts of the country vary from 40 to 70 per cent of the crop, with 100 per cent losses on certain plots.

A joint UN crop and food security assessment mission is currently on the ground to measure the locust’s damages to food security and livelihoods. More detailed data analysis will be available in July, but the resources to start preparation for the field actions have to be available now, FAO stressed.

The agency estimates that losses in rice production could be up to 630,000 tonnes, or about 25 per cent of total demand for rice in Madagascar. Rice is the main staple in the country, where 80 per cent of the population lives on less than a dollar per day.