Posted on: August 10th, 2013 by AlYunaniya Staff No Comments 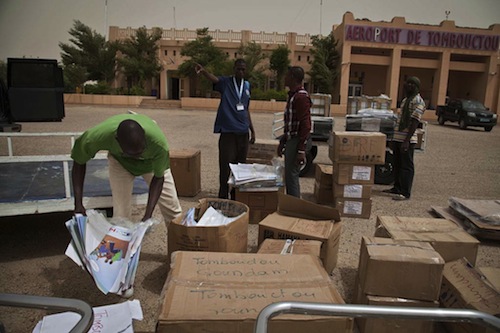 Former Prime Minister Ibrahim Boubacar Keita and ex-Finance Minister Soumaila Cisse will contest the second round. The election is intended to restore democracy and stability after months of unrest, BBC writes.

Ahead of the presidential run-off, the United Nations Stabilization Mission in Mali (MINUSMA) has assisted national electoral authorities in getting materials out to remote areas in the north. The UN spokesperson in New York, Farhan Haq, said that MINUSMA is “deploying sensitive materials to Timbuktu, Gao, Kidal and Mopti for the second round of presidential elections.”

As it did in the first round of voting on 28 July, the peacekeeping mission will also support the Malian Defence and Security Forces in implementing the security plan for the elections.

Haq said MINUSMA also organized a flight to Néma, Mauritania, to ensure that Malian refugees living in camps there could obtain a voter card. The move is part of UN efforts to increase the number of refugees who are able to vote, he noted.

The first round of the elections was seen as an important step on the path to recovery for Mali, which, since early 2012, witnessed a military coup d’état, renewed fighting between Government forces and Tuareg rebels, and the seizure of its northern territory by radical Islamists.

In a statement ahead of the July ballot, Secretary-General Ban Ki-moon had noted the importance of the election for the restoration of constitutional order and national dialogue and reconciliation in the country.

He had also cited the need to ensure that any post-election disputes are resolved through peaceful and legal means.