Mediterranean gas find: a chance for US to break with Turkey; opinion 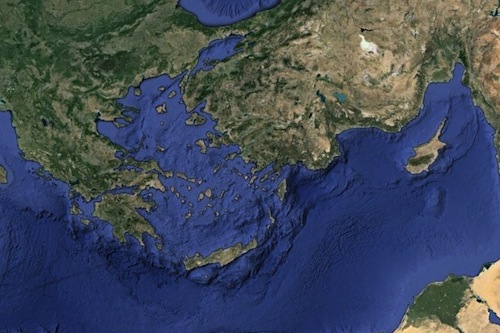 Seth Cropsey is a Senior Fellow at Hudson Institute. Previously, he served as Deputy Undersecretary of the Navy during both the Ronald Reagan and George H.W. Bush administrations.

In his article titled “Mediterranean Gas Find: A Chance for U.S. to Break with Turkey”, published on hudson.org argues that “politics and alliances in the eastern Mediterranean are shifting, and the region’s security framework is splintering. The region is now divided as much within the Muslim world as between it and the non-Muslim states.

A new order is emerging as a result of three major events: the redrawing of the region’s hydrocarbon map, with the discovery of substantial hydrocarbon deposits in the Cypriot and Israeli exclusive economic zones; Turkey’s adoption of a hostile neo-Ottoman ideology to guide it in the 21st century; and the “Arab Spring.” At the mid-point of this political shift, Greece and Cyprus -coordinating with Israel- have remained the principal states in the region that are friendly to the West. When volatility and fear are on the rise, predictability becomes especially prized.”

According to Cropsey, the roles of Greece and Cyprus in the West’s political and security framework offer U.S. policy makers an arc of stability in the eastern Mediterranean, and bring the EU to within 45 minutes of Israel’s borders. Port usage, naval facilities, and strategic airbases that Cyprus and Greece have long extended to the United States permit a U.S. Sixth Fleet — if the U.S. should decide to return that once-powerful naval force to even a fraction of its former strength — to safeguard the region’s sea lines of communication. The region’s increasing volatility has elevated the strategic roles of Greece and Cyprus, and offers an incentive for American statesmen to promote a new order that establishes stronger relations with both countries and bolsters their regional standing.

According to the author, the U.S.’s interest and involvement in the Mediterranean dates to the Jefferson administration. The United States has sought a stable region since the U.S. Navy battled the Barbary pirates in the early 19th century to keep them from preying on American commercial interests from their ports in North Africa. The ascendance of radical Islam as the region’s most dynamic political force, and the deepening connections of the radicals with the “Arab Spring,” is a great threat to U.S. interests — as the recent closure of 19 U.S. embassies from North Africa to the Middle East and as far south as Madagascar demonstrates. Islamist and authoritarian regimes have emerged after the demise of the region’s ancien régime. The regional drift toward authoritarian Islamism is a reminder of the late Harvard professor Samuel Huntington’s warning about a clash of civilizations, and suggests a struggle as long and dangerous as the one that occupied Europe’s attention throughout the centuries-long reign of imperial Ottoman rule.

The Ottomans’ successor, Cropsey writes, modern-day Turkey, has abandoned the Kemalist enterprise and is governed by an increasingly repressive, hostile, and Islamist regime. Turkey’s economic growth has encouraged Prime Minister Tayyip Erdogan to hew to his ideology, casting aside modern-day Turkey’s westward-looking and secular character that succeeded the collapse of the Ottoman Empire. In its place, Mr. Erdogan has reoriented Turkey towards the East, emphasizing Sunni Muslim solidarity and hostility towards the U.S.’s non-Muslim allies in the region. Erdogan’s policy looks to reestablish the hegemony that his Ottoman predecessors achieved. There are many examples of this policy, such as the Turkish navy’s recent interference with the efforts of Israel and Cyprus to consolidate efforts to extract hydrocarbons from the sea beds within their exclusive economic zones; Turkish Foreign Minister Ahmet Davutoglu’s March promise to “again tie Sarajevo to Damascus, Benghazi to … Batumi” (on Georgia’s Black Sea coast); and the London-based International Institute for Strategic Studies’ observation that “in March 2012, the Turkish government introduced a five-year strategic plan to make the country’s armaments industry one of the world’s ten largest by 2016.”

A combination of Islamist rule, a neo-Ottoman, ideology and Turkey’s attempt to return as the region’s hegemon opposes the U.S. goal of a democratic and peaceful region. It threatens America’s allies — Greece, Cyprus, Israel, and new EU member Bulgaria, which has complained of Turkey’s control over both supplies and prices of the natural gas it transits to the EU…