Merkel: painful reforms will pay off 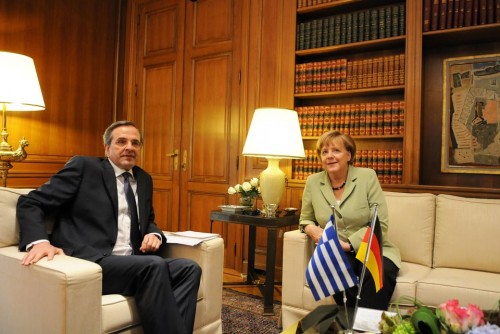 “I have come here today in full knowledge that the period Greece is living through right now is an extremely difficult one for the Greeks and many people are suffering,” German Chancellor Angela Merkel said during a joint news conference with Prime Minister Antonis Samaras. “Precisely for that reason I want to say that much of the path is already behind us,” she added, according to Kathimerini.

Merkel said the aid payment was ”urgently needed”. She added: “The troika report will come when it is ready. Being thorough is more important than being quick… We are working hard on this, but we must resolve all the problems,” she added.

Samaras began the joint press statement, saying “Europe is a common house for all of us…We will enact the measures which we should have enacted long ago. I told Chancellor Merkel that the Greek people are bleeding this moment, but that I am sticking to the plan. We don’t ask for favors. Merkel showed respect for the sacrifices we have made, and says that they must not go to waste. Greece has turned a page, and that her image in the international press has improved significantly.”

In comments made before the press, President Karolos Papoulias said to Chancellor Merkel: “We have almost exhausted our endurance. We must think of measures that will bring hope, particularly growth measures. We must fight youth unemployment, and underemployment of women. I don’t have anything else to say, we will discuss it in the future, Ms Prime Minister (as he called her). I am quite pleased that you visited.”

Regarding the issue of extending the fiscal adjustment, sources said Angela Merkel said: “we can talk about it, but everything depends on the troika report.”

As regards the disbursement of the next tranche, government sources said the German Chancellor “ruled out the possibility to be given before the EU Summit”, and added that she hoped that the Summit will instruct an extraordinary Eurogroup to release the money.

At the same time, Greek police fired tear gas and stun grenades when protesters tried to break through a barrier to reach the cordoned-off area where Merkel and Samaras were meeting. Some demonstrators pelted police with rocks, bottles and sticks, Kathimerini writes.

Four people dressed in World War Two-era German military uniforms and riding on a small jeep, waved black-white-and-red swastika flags and stuck their hands out in the Hitler salute.

Banners read ”Merkel out, Greece is not your colony” and ”This is not a European Union, this is slavery.”

Some 6,000 police officers were deployed, including anti-terrorist units and rooftop snipers, to provide security during the six-hour visit. German sites in the Greek capital, including the embassy and Goethe Institute, were under special protection.