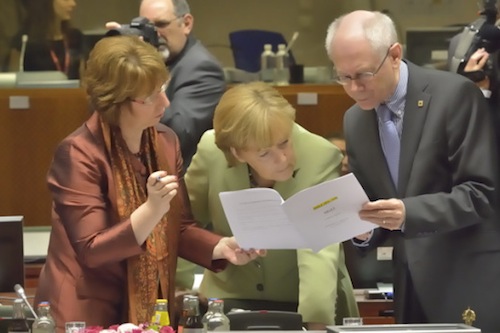 Angela Merkel’s personal triumph in the German elections yesterday will not change the European political scenery much but it will certainly affect the way some things are done in Brussels and probably in Berlin, if the socialists of the SPD finally join the winning Christian democrats of CDU-CSU in a grand coalition government. In any case the German Finance Minister Wolfgang Schaeuble, the most senior member of the government and the governing party after the Chancellor, commenting on the results soon after it became clear that his party, the CDU, was only a few Bundestang seats away from absolute majority, he assured everybody that Germany will not change its stance towards Europe. Speaking at the ARD television late yesterday night he stated, “We have a broad fundamental consensus regarding the European policy”. Both Merkel and Schaeuble defended passionately the euro and the European project during the electoral campaign. Actually Merkel made the euro the main theme of her last pre-election speech.

As the tradition wants it the next German government will not be formed in a few days. It usually takes weeks and this will not change now. As things stand presently it is more plausible than not that Merkel will seek a government partnership with the SPD’s socialists to form a grand coalition administration as they did during Merkel’s first term in the Chancellery. The last single party government in Germany was in 1957 under Conrad Adenauer, the first post war Chancellor governing the country from 1949 until 1963 and it is most unlikely this to be repeated now.

In any case Germany’s stance will not change regarding the two most important Eurozone issues that stand unresolved for months, the Greek enigma and the bank resolutions. Both of them triggered intense electoral confrontations more so over the Greek affair. The other thorny discussion, namely the structure of the Single Resolution Mechanism (SRM) for failing banks, didn’t acquire the dimensions of a prime electoral theme. It was debated in more closed circles where Berlin reaffirmed its position for a decentralised SRM, which will not disseminate all over the Eurozone part of the liabilities to be left behind, after a major bank resolution is accomplished.

As for the Greek case, Germany has already accepted that this country will need a third aid package towards the mid of 2014, but this time it won’t be tens of billions. Incidentally also yesterday the auditors representing the troika of Greece’s lenders EU-ECB-IMF were in Athens meeting the Financial Minister Yiannis Stournaras. Reportedly they all agreed that Greece is bound to show this year a positive prime surplus albeit small in its fiscal accounts. They also accepted that the 2013 recession reading will be smaller than predicted.

At this point it must be reminded that on the condition Greece attains this year a fiscal surplus, its Eurozone partners and lenders have undertaken the obligation to cut down the country’s sovereign debt to sustainable levels. This issue was extensively debated during the pre-election period in Germany and it reached even the eight o’clock news bulletins. During this debate both Chancellor Merkel and her Finance Minister Schaeuble repelled the proposal of a straight haircut of the loans Greece owes to its Eurozone partners/lenders. To note here that the largest credits having been accorded to Athens came from Berlin. However both the two leading German politicians didn’t exclude the possibility of cutting down interest rates and extending pay off time, a proposal that amounts to a lesser overall burden for Greece but avoids a reduction of the principal.

All in all the triumphant Angela Merkel in her first comments on the electoral results yesterday night appeared very restricted, about the new government she is expected to present to Bundestag. She was careful not to exclude a possible grand coalition with the socialists of SPD. This prospect however doesn’t seem enough to change Germany’s positions on the two hot Eurozone issues, the Greek problem and the SRM. On the contrary Berlin would rather appear more unbending on its opinions.

Republished by permission from europeansting.com.