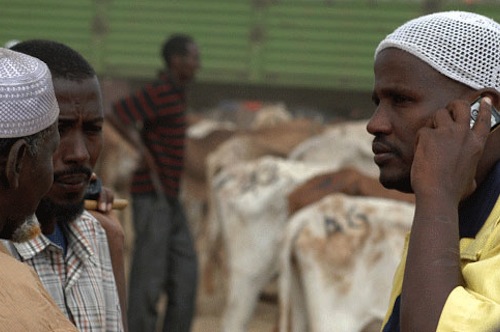 Mobile phones are allowing Kenyan farmers and veterinarians to issue quick alerts of possible disease outbreaks and track vaccination campaigns, the United Nations Food and Agriculture Organization (FAO) said today, stressing the potential of this technology to encourage innovation in the livestock sector.

FAO said in a news release that the speed of communication and accuracy of the global positioning system (GPS) function integrated on mobile phones is of great advantage for farmers who are increasingly using this technology.

“FAO and partners are piggy-backing on this enormous uptake of mobile phone technology for uses in reporting animal disease outbreaks, tracking vaccination campaigns and the delivery of veterinary treatments, such as de-worming animals,” said FAO’s Assistant Representative for Programme Implementation in the country, Robert Allport.

Three out of four people have a mobile phone in Kenya and while only a third of Kenyans have access to the Internet, 99 per cent of this comes from mobile phones.

Mr. Allport said the widespread adoption of this technology has revolutionized the livestock sector, as up until five years ago veterinarians had to travel to remote locations to record data and then again to process the paperwork.

“Cellular phones eliminate delays in receiving field data, since all the information is relayed via the mobile network,” Mr. Allport said.

The application would allow users to access and monitor vaccination data in real-time, and could potentially be made available not just to veterinarians but to animal health workers and village elders.

FAO has also developed an information system to display data on disease outbreaks that would allow for an early warning system to isolate infected animals and prevent the death of tens of thousands of livestock. The system, known as EMPRES-i will be tested in Uganda this year.

“The FAO EMPRES-i system is truly a global public good, and our reporting and response times are being constantly improved, now thanks to incredible technology,” said Juan Lubroth, FAO’s Chief Veterinary Officer. “Prevention, preparedness and early response are powerful concepts that when translated into tools can be effectively used against infectious diseases, thereby safeguard people’s livelihoods, fend off hunger and, in some cases, human illness,” he added.

In addition, FAO has partnered with Oxfam and Nokia to monitor water points in pastoralist areas as an early warning indicator for drought in Kenya and Ethiopia, and is assessing how mobile technology can be used to better link livestock producers with markets and livestock traders.

“Traders won’t travel to a remote area to purchase animals unless they have a guarantee that they will be able to buy a minimum number of animals. Otherwise, the expense of making the trip isn’t worthwhile,” Mr. Allport said. “But if sellers at market can relay information to a central point about how many animals they have, where and at what price, then the market functions more efficiently and pricing becomes more transparent. They can also collectively bargain for better prices.”