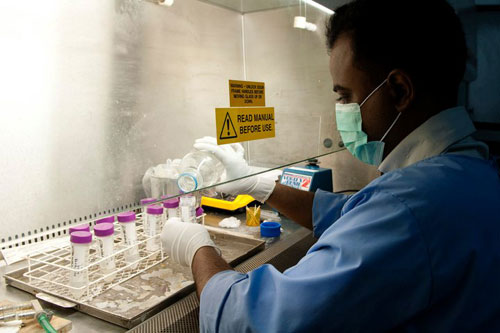 The United Nations health agency and the Global Fund to Fight AIDS, Tuberculosis and Malaria said some $1.6 billion in international funding is needed every year to treat and prevent tuberculosis before drug-resistant strains of the disease spread widely.

In a joint news release, the Director-General of the World Health Organizations (WHO), Margaret Chan, and the Executive Director of the Global Fund, Mark Dybul, said significant funds need to be mobilized to prevent the spread of multi-drug resistant TB, also known as MDR-TB.

“We are treading water at a time when we desperately need to scale up our response to MDR-TB,” said Dr. Chan. “We have gained a lot of ground in TB control through international collaboration, but it can easily be lost if we do not act now.”

In 2011, 1.4 million people died due to TB, with the greatest per capita death rate in Africa. MDR-TB presents a major threat, with an estimated 630,000 people ill worldwide with this form of TB today.

WHO and the Global Fund said the $1.6 billion is needed to fill the funding gap in 118 low- and middle-income countries, the majority of which are located in Africa. These funds could enable full treatment for 17 million TB and MDR-TB patients, and save some 6 million lives in the next three years.

“It is critical that we raise the funding that is urgently needed to control this disease,” said Dr. Dybul. “If we don’t act now, our costs could skyrocket. It is invest now or pay forever.”

The call for an increase in funds for TB comes ahead of World TB Day on 24 March, which commemorates the day when Robert Koch discovered the mycobacterium that causes tuberculosis in 1882. The Day seeks to raise awareness about the global epidemic and efforts to eliminate the disease.

In addition to the $1.6 billion annual gap in international financing, WHO and partners estimate that there is a $1.3 billion annual gap for TB research and development for the 2014-2016 period, including clinical trials for new TB drugs, diagnostics and vaccines.