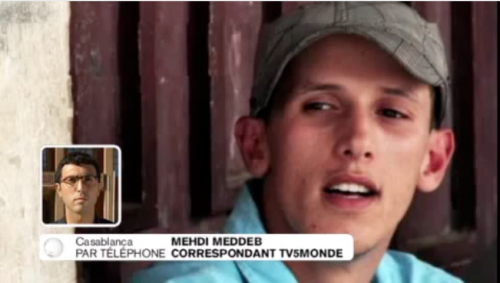 The Arabic Network for Human Rights Information  (ANHRI) has denounced the Moroccan regime for imprisoning a rapper for criticizing the police and calls on the Moroccan regime to protect freedom of opinion and expression and the acceptance of political criticism.

The rapper Moaz Balghawat known as ‘The Spiteful’ (AL Haqed) who is imprisoned since last March with charges of “insulting an organized public authority” was had been arrested since the end of March 2012 for a rap song called “dogs of the state”.

“Arresting a singer for criticizing the police performance shows what does it cost to exercise the rights guaranteed by the Constitution in Morocco and the fact that the Moroccan regime proves day after day that it is against fundamental rights and freedoms, despite the constitutional amendments adopted in 2011 in the name of reforming and reducing the king’s powers,” ANHRI said.

On May 11, Casablanca First Instance Court sentenced him to a one year imprisonment with a fine of one thousand Dirhams, in addition to the publication of the judgment in three local newspapers, on charges of “insulting public employees” under and “insulting the institutions of the state”.

Balghawat admitted the ownership of the song but denied any connection to the background images of the clip posted on YouTube as one of the images is a mocked-up photo of a policeman with a donkey’s head. And although the lack of evidence that Balghawat is the clip owner, the court ignored his defenses, according to ANHRI.

Jurists and activists confirm that Al-Haqed’s arrest was for boldly and courageously criticizing the king and the ruling regime, as well for being a member of the opposing ‘February 20 Movement’ in Morocco. This movement is responsible for demonstrations and activities claiming freedoms in the country. Al-Haqed is considered the voice of the movement that gets a lot of attention and follow ups.