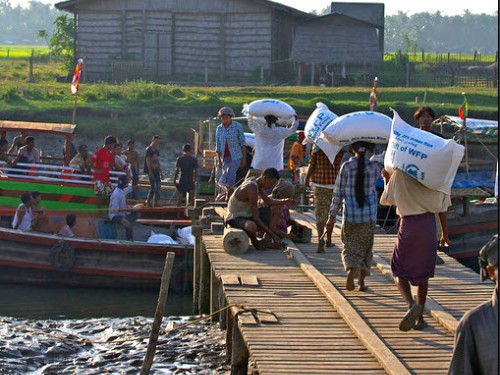 Tensions are still high in Rakhine State in western Myanmar, where inter-communal violence broke out eight months ago, leaving more than 115,000 people displaced and hundreds of homes burned.

In this tense atmosphere, misperceptions have arisen that humanitarian agencies are limiting aid to one side in the conflict rather than following the humanitarian principles of impartiality, independence and neutrality. Humanitarian agencies say this has caused problems in interacting with people who have been affected by the crisis and has increased the risk to their workers. Some agencies have been forced to suspend their operations because of threats and intimidation.

On the outskirts of the main town of Sittwe, temporary camps for 70,000 displaced people have been erected. This is now the Muslim sector and its inhabitants are not permitted to come into town. Elsewhere in the town, a smaller number of the mostly Buddhist population have been forced from their homes by the unrest are also living in temporary shelters. In other parts of the State, many more people are living in camps. Conditions are still poor, despite aid provided by the Government, private donors, the UN and local and international NGOs.

To combat the misperceptions and improve access to everyone in need of aid, OCHA commissioned a study on behalf of the Humanitarian Country Team to look at how international aid organizations can improve their engagement with affected communities in Rakhine.

“Up until now the general approach has been to keep a low profile,” said Barbara Manzi, head of OCHA’s office in Myanmar. “This approach has worked for now but we need to change this dynamic and improve the perception of our work.”

The study found that while overall perceptions are improving as the community sees humanitarian assistance going to both communities, the UN and NGOs have not generally tried to address the misconceptions directly, through either speaking to the communities or to local media. As a result, there is a poor understanding of what humanitarian agencies are doing.

“We conducted a survey of the general community and asked them what they wanted to know about the current work of UN and NGO activities,” said Jamie Munn, a consultant with the study. “Their questions were really simple. They wanted to know exactly how we were assisting people and what our future plans were – all easy questions to answer.”

The humanitarian community is now looking at how it can incorporate the study’s recommendations into its programming. This includes contacting local media organizations and engaging with a broader group of stakeholders in the community.

One international NGO which has prioritized these strategies and has held regular information briefings with its neighbours says that a sense of trust is being established. The organization reports that it has not encountered staff intimidation or other obstacles to its work, indicating that the strategy has paid off.

The study also found that most people said they receive information from family and friends or from the media, including radio and newspapers. While social media platforms like Facebook have been blamed for fueling rumours and tensions, they do not appear to be a source of information for the majority of the community.

“One easy way for organizations to address some of the misperceptions is to support their local staff to become ambassadors and provide them with the right information to answer questions that their family and friends are asking them, such as whether aid organizations are providing aid to both communities,” said Emily Rogers, another consultant on the survey.

The study also recommends that there should be much stronger communications with people across Rakhine State, including people in camps that the humanitarian agencies are serving. People were generally not aware of the criteria for receiving aid or how often they were likely to receive it, and they knew very little about the humanitarian agencies involved in relief work.

“If we engage with communities now, both in the towns, villages and in the camps, we will be able to address some of the misconceptions that currently exist,” said Ms. Rogers. “More importantly, open communication channels will prevent new grievances flaring up as humanitarian operations continue in Rakhine.”