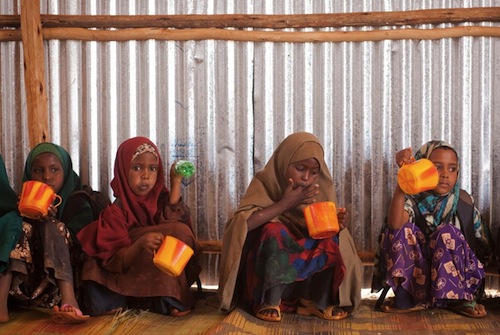 Almost 870 million people, or one in eight, are suffering from chronic malnutrition, according to a new United Nations report, which shows a sharp decline in the number of undernourished people over the past two decades, but warns that immediate action is still needed to tackle hunger particularly in developing countries.

The State of Food Insecurity in the World 2012 (SOFI), which was jointly published by the Food and Agriculture Organization (FAO), the International Fund for Agricultural Development (IFAD) and the World Food Programme (WFP), reveals that the number of hungry declined more sharply between 1990 and 2007 than previously believed. The new estimates are based on an improved methodology and data for the last two decades, the agencies said in a news release. The world has the knowledge and the means to eliminate all forms of food insecurity and malnutrition

Between the periods of 1990-92 and 2010-2012, the number of hungry people declined by 132 million, or from 18.6 per cent to 12.5 per cent of the world’s population. However, since 2007 global progress in reducing hunger has slowed and leveled off, which requires countries to take appropriate measures if they are to meet the Millennium Development Goal (MDG) of reducing the proportion of people who suffer from hunger by half by 2015, the report says.

“If the average annual hunger reduction of the past 20 years continues through to 2015, the percentage of undernourishment in the developing countries would reach 12.5 per cent – still above the MDG target of 11.6 per cent, but much closer to it than previously estimated,” the report says.

“In today’s world of unprecedented technical and economic opportunities, we find it entirely unacceptable that more than 100 million children under five are underweight, and therefore unable to realize their full human and socio-economic potential, and that childhood malnutrition is a cause of death for more than 2.5 million children every year,” says the report’s foreword, written by FAO Director-General José Graziano da Silva, IFAD President Kanayo F. Nwanze and WFP Executive Director Ertharin Cousin.

“We note with particular concern that the recovery of the world economy from the recent global financial crisis remains fragile. We nonetheless appeal to the international community to make extra efforts to assist the poorest in realizing their basic human right to adequate food. The world has the knowledge and the means to eliminate all forms of food insecurity and malnutrition,” they said.

The new estimates suggest that the increase in hunger during 2007-2010 was less severe than previously thought, and that the 2008-2009 economic crisis did not cause an immediate economic slowdown in many developing countries as was feared could happen. Many governments also succeeded in cushioning the shock and protecting vulnerable populations from the effects of rising food prices.

The new report notes that the methodology does not capture the short-term effects of food price surges and other economic shocks and adds that FAO is working to develop a wider set of indicators to better capture dietary quality and other dimensions of food security.

The vast majority of the hungry – 852 million – live in developing countries in Asia and Africa. While the number of malnourished people declined by almost 30 per cent in Asia and the Pacific over the past two decades, Africa experienced an increase from 175 million to 239 million people during the same period.

The report suggests adopting a twin-track approach based on support for economic growth, including agriculture growth involving smallholders, and safety nets for the most vulnerable. In addition, higher priority must be given to getting quality nutrition to prevent malnutrition co-existing with obesity and non-communicable diseases.