Posted on: December 1st, 2012 by Romana Turina No Comments 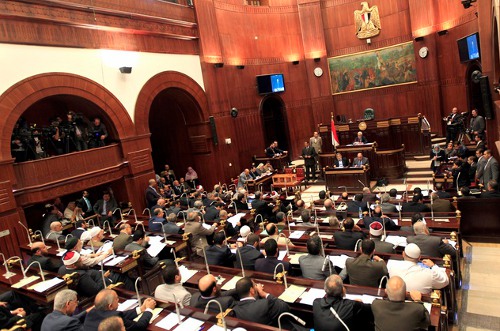 The first draft of the constitution approved on November 29, 2012, by Egypt’s 100-member constituent assembly in the midst of a political stand-off between the president and the judiciary, provides for basic protections against arbitrary detention and torture and for some economic rights but fails to end military trials of civilians or to protect freedom of expression and religion.

The constitution drafting process has been extremely contentious, and a number of assembly members resigned in protest over what they said was the failure of the dominant Islamist factions to compromise on key issues, including the place of religion in affairs of state. The decision comes on the heels of President Mohamed Morsy’s controversial November 22 Constitutional Declaration immunizing his decrees from judicial review.

“The decision of constituent assembly leaders to move a flawed and contradictory draft to a vote is not the right way to guarantee fundamental rights or to promote respect for the rule of law,” said Joe Stork, deputy Middle East and North Africa director at Human Rights Watch. “Rushing through a draft while serious concerns about key rights protections remain unaddressed will create huge problems down the road that won’t be easy to fix.”

Human Rights Watch wrote to the constituent assembly on October 8 outlining key concerns about various rights provisions based on a review of a September 27 draft of the constitution. There have been some improvements in the final draft, such as in the prohibition against torture and the deletion of other provisions incompatible with human rights law that would have unduly restricted free expression or the practice of religion, Human Rights Watch said.

Article 81 states that no law may limit the essence of the rights and freedoms set out in the constitution but goes on to say that, “These rights and freedoms shall be exercised insofar as they do not contradict the principles set out in the Chapter on State and Society in this constitution.” The provisions in that chapter include article 10, which states that, “The state and society shall commit to preserving the true nature of the Egyptian family,” and article 11, which states that, “The state shall protect ethics and morals and public order.” The language in both these provisions is overly broad, open to interpretation, and available to justify wide-ranging limitations on key rights, Human Rights Watch said. It appears to place the “true nature of the family” and morals and public orders above fundamental rights.

One positive development is that the final draft no longer includes what had been article 68 in earlier drafts on women’s rights, which stipulated that equality for women would be subject to conformity with rulings of Islamic law, a provision strongly promoted by Salafi members of the assembly. However, the draft no longer lists “sex” as one of the grounds for prohibiting discrimination, as no grounds are named. Article 30 now states that, “Citizens are equal before the law and equal in rights and obligations without discrimination,” without specifying whom this provision covers. Read together with article 10, the failure to specify discrimination on the grounds of gender becomes problematic, Human Rights Watch said. Article 10 says: The state shall provide free motherhood and childhood services and shall balance between a woman’s obligations toward the family and public work. The state shall provide for special care and protection for single mothers, divorced women and widows.

On the ground of freedom of speech, article 45 protects freedom of expression without stating what legitimate limitations are permissible and how to balance this right against article 31, which states that, “The individual person may not be insulted,” and article 44 prohibiting “the insulting of prophets.” Articles 31 and 44 are not legitimate limitations on freedom of expression under human rights law, and they would appear to make difficult, if not impossible, any meaningful reform to existing penal code provisions that criminalize “insult” and defamation, provisions frequently used in the past to prosecute critics of the government. Criminal prosecutions on charges of “insulting the president” or “insulting the judiciary” have increased since Morsy took office.

The final draft fails to limit military trials of civilians, backtracking on language in the rights chapter in drafts as recently as November 11, article 75 of which stated that, “No civilian shall be tried before the military justice system.” Assembly members deleted this language after military justice officials formally objected. Article 198 of the final draft now provides that, “Civilians may not be tried before the military justice system except for crimes that harm the armed forces, and this shall be defined by law.” This leaves intact the military’s discretion to try civilians under the Code of Military Justice.

Finally, article 145 states that the president shall sign treaties and that they must be ratified by the upper and lower houses of parliament, and goes on to say that, “No international treaty that contradicts the provisions of this constitution shall be signed.” Human Rights Watch had urged members of the Assembly to include a provision directly incorporating human rights as defined by international treaties ratified by Egypt into Egyptian law to strengthen the basis for amending many domestic laws that restrict rights.