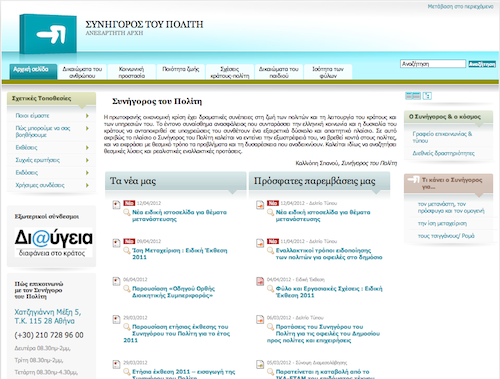 The Greek Ombudsman is introducing a new website concerning immigration issues to replace the old one that has operated since 2005, Kathimerini reports.

The Greek Ombudsman, which is also called the citizen’s advocate, is an independent authority aiming at mediating between the public administration and citizens, in order to help them exercise their rights effectively.

The purpose of this new website is to contribute to the improvement of information concerning immigration, asylum and citizenship.

The site includes special reports, findings and legislative recommendations of the Ombudsman on general issues of immigration, asylum and citizenship, as well as recent speeches, documents and opinions of the independent authority on specific issues which has been asked to mediate for.

It was founded in October 1998 and provides its services to the public free of charge. It has received more than 82.535 complaints during its eight first years of operation (from 1 October 1998 to 31 December 2006).

The site is at : http://www.synigoros.gr/?i=foreigner.el.home