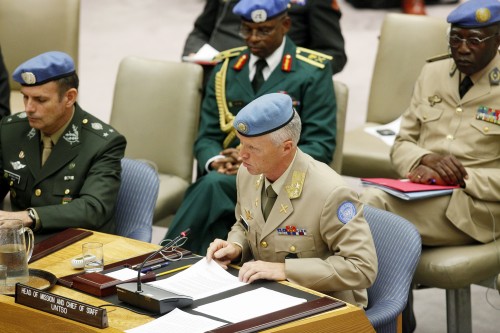 Secretary-General Ban Ki-moon announced on Thursday the appointment of Major General Robert Mood of Norway as Head of Mission of the United Nations Supervision Mission in Syria (UNSMIS).

“The mission of the observers may be risky. The situation in Syria remains fragile, and one will be completely dependent on both parties respecting the integrity of UN personnel,” says Norweigian Minister of Defence Espen Barth Eid.

“We therefore have to have realistic expectations in terms of what the observer force can achieve. Still, our hope is that the presence of the observers may help reduce the level of violence in the country,” he added in a statement released by the Norweigian mission to  UN website.

Mood has been a military advisor to Kofi Annan by supporting Annan in his efforts to halt the violence in Syria, and to prepare the ground for the establishment of an observer mission.

Born in Norway in 1958, Mr. Mood has extensive experience and knowledge ofpeacekeeping operations at a national and international level, including inUN operations such as the Organization¹s Interim Force in Lebanon (UNIFIL)from 1989 to 1990.

The observers are also tasked with monitoring and supporting the full implementation of the six-point peace plan put fornt by the Joint Special Envoy of the UN and the League of Arab States for Syria, Kofi Annan, which calls for an end to the violence, access for humanitarian agencies to provide relief to those in need, the release of detainees, and the start of inclusive political dialogue that takes into account the wants of the Syrian people.