Posted on: June 5th, 2013 by Dimitris Ioannou No Comments

‘Nothing less than the eradication of hunger and malnutrition’ 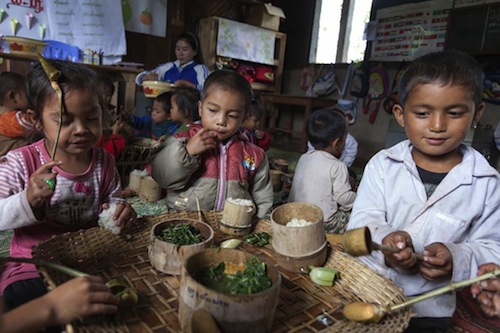 The head of the United Nations Food and Agriculture Organization (FAO) called for greater efforts to combat malnutrition and hunger worldwide as the agency launched its flagship annual report, which this year focuses on improved food systems for better nutrition.

In a message marking the launch of The State of Food and Agriculture (SOFA), Director-General José Graziano da Silva said that although the world has registered some progress on hunger, one form of malnutrition, there was still “a long way” to go.

“FAO’s message is that we must strive for nothing less than the eradication of hunger and malnutrition,” he declared.

The report notes that while some 870 million people were still hungry in 2010-2012, this is just a fraction of the billions of people whose health, well-being and lives are blighted by malnutrition.

Two billion people suffer from one or more micronutrient deficiencies, while 1.4 billion are overweight, of whom 500 million are obese, according to the report, which adds that 26 per cent of all children under five are stunted and 31 per cent suffer from Vitamin A deficiency.

FAO states in a news release that vitamin and micronutrients deficiency together with obesity and overweight, costs to the world economy in lost productivity and health care are “unacceptably high” and could account for as much as 5 per cent of the global gross domestic product – $3.5 trillion, or $500 per person.

“That is almost the entire annual GDP of Germany, Europe’s largest economy,” the agency points out.

FAO notes that, in social terms, child and maternal malnutrition continue to reduce the quality of life and life expectancy of millions of people, while obesity-related health problems, such as heart disease and diabetes, affect millions more.

The key to combating malnutrition is healthy diets and good nutrition – which must start with food and agriculture, stresses FAO. “The way we grow, raise, process, transport and distribute food influences what we eat,” it says, adding that improved food systems can make food more affordable, diverse and nutritious.

The report makes a number of recommendations, including using appropriate agricultural policies, investment and research to increase productivity; cutting food losses and waste, which currently amount to one third of the food produced for human consumption every year; and helping consumers make good dietary choices for better nutrition through education, information and other actions.

Among other recommendations is to make food systems more responsive to the needs of mothers and young children. FAO notes that malnutrition during the critical ‘first 1,000 days’ from conception can cause lasting damage to women’s health and life-long physical and cognitive impairment in children.

The agency cites several projects that have proved successful in raising nutrition levels such as the promotion of home gardens in West Africa; encouragement of mixed vegetable and animal farming systems together with income-generating activities in some Asian countries; and public-private partnerships to enrich products like yoghurt or cooking oil with nutrients.

Making food systems enhance nutrition is a complex task, the report points out, adding that it requires strong political commitment and leadership at the highest levels, broad-based partnerships and coordinated approaches with other important sectors such as health and education.

“Food systems governance that is providing leadership, coordinating effectively and fostering collaboration among the many stakeholders is a first priority,” it says.

Tags: FAO, hunger, malnutrition, The State of Food and Agriculture