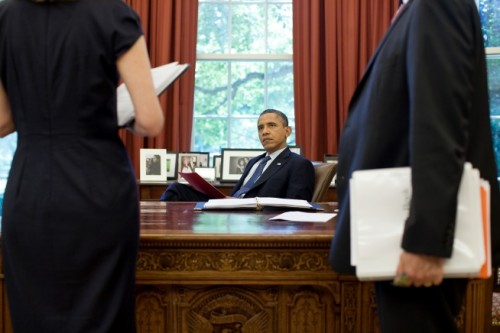 U.S. President Barack Obama warned on Monday the Syrian regime and “other players on the ground” that the use or movement of chemical weapons would change the administration’s “calculus” in the region suggesting the possibility of a more direct intervention in Syria.

“We have been very clear to the Assad regime, but also to other players on the ground, that a red line for us is if we start seeing a whole bunch of chemical weapons moving around or being utilized. That would change my calculus,” Obama said.

“That would change my equation. . . . We’re monitoring that situation very carefully. We have put together a range of contingency plans.”

Last month, Syria acknowledged for the first time that it had chemical weapons and said it could use them if foreign countries intervened in their affairs. The threat drew strong warnings from Washington and its allies.

“We cannot have a situation where chemical or biological weapons are falling into the hands of the wrong people,” Obama told the impromptu news conference on Monday admitting he was not “absolutely confident” the stockpile was secure.

Western countries and Israel have voiced fears that chemical weapons could fall into the hands of militant groups such as Lebanese Hezbollah Syrian President Bashar al-Assad.

Israeli Defense Minister Ehud Barak has previously voiced fears that chemical weapons could fall into hands of militant groups and has warned that it would take military action, if needed, to ensure those weapons did not reach Assad’s Hezbollah allies in Lebanon.

The US president’s comments came as a female Japanese reporter was killed while covering clashes in the city of Aleppo, according to the Washington Post.

The dead reporter was 45-year-old Mika Yamamoto, was the fourth foreign reporter killed in Syria since March 2011.

Meanwhile, the UK-based Syrian Observatory for Human Rights  said more than 140 people were killed in Syria on Monday.

The opposition Syrian National Council said that government forces using combat helicopters, tanks and heavy artillery had carried out “savage” attacks on Herak, south of Damascus, warning that food and medicines were running out, according to Al Jazeera.

23,000 people have now been killed since March last year, according to the Observatory, while the UN puts the death toll at  17,000.