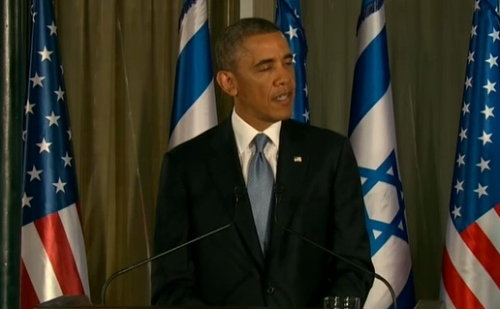 US President Barack Obama landed in Israel on Wednesday, amid protests and tight security in Israel and the Palestinian territories.

US President Barack Obama said at the start of his visit to Israel that the US’ commitment to Israel’s security was not negotiable and that peace must come to the Holy Land, according to Al Jazeera.

“I am confident in declaring that our alliance is eternal, is forever,” he added.

The presidential airplane which landed at Ben-Gurion Airport was awaited by over 1,000 people, according to the Jerusalem Post.

He was greeted at the airport by Prime Minister Benjamin Netanyahu and President Shimon Peres.

The trip is part of his sweep across the Middle East, which will include visits to the West Bank and Jordan.

The conflict in syria and concerns over Iran’s nuclear ambitions are expected to top the agenda in talks with  Israel’s Prime Minister Benjamin Netanyahu.

Obama will also hold separate talks with Palestinian President Mahmoud Abbas in the West Bank during his visit to the Middle East.

White House officials say he will attempt to get Palestinians and Israelis back on the table for peace talks.

He will also seek to reassure Netanyahu he is committed to preventing Iran from getting a nuclear bomb and discuss ways of containing Syria’s civil war.

However, the White House has not provided any hopes of any major breakthrough, a reversal from Obama’s first four years in office when aides said he would only visit the Jewish state if he had something concrete to accomplish, according to Reuters.

Meanwhile, Palestinians want to see from Obama a stronger stance for the freeze of Israeli settlements in the West Bank and East Jerusalem.

According to media reports protests have been staged in Gaza and Hebron upon the arrival of Obama while posters on Ramallah streets sarcastically advise Obama not to bring his smartphone because Israel does not allow 3G or better service in the Palestinian territories.

In a related development, the U.S. refused to take part on Monday in a UN Human Rights Council debate on Israeli settlements and its effects on Palestinians.

The experts concluded that Israel’s “creeping annexation’’ of the West Bank had led to many rights violations.