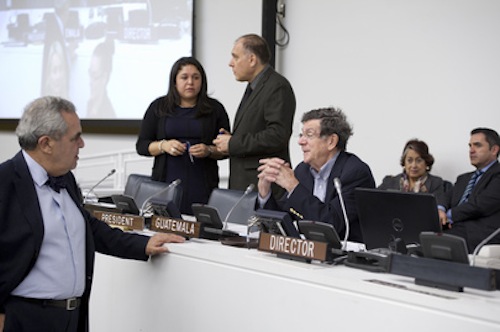 The OSCE Senior Adviser on Gender Issues, Miroslava Beham, concluding today a two-day visit to Portugal, stressed that special attention must be paid to women’s rights in times of austerity.

Beham met with representatives of the Portuguese Foreign Ministry, civil society, academia, members of the Portuguese Commission for Citizenship and Equality and the interministerial working group on the implementation of UN Security Council Resolution (UNSCR) 1325 on women, peace and security. She also visited a shelter for women victims of violence.

“There is a particular need to uphold women’s rights now when the economic crisis is hitting women harder than men,” Beham said. “This is a matter for the security and stability of the whole society.”

She underlined that Portugal was among the first countries in the world to develop a National Action Plan on the implementation of UNSCR 1325 and has in place a comprehensive legal framework on gender equality issues.

Beham said that the discussions on the implementation of UNSCR 1325, combating violence against women, gender budgeting and other related issues were constructive and result-oriented. The meetings showed that there is a lot of common ground for expanding co-operation between the OSCE and Portugal in the promotion of gender equality, she emphasized.