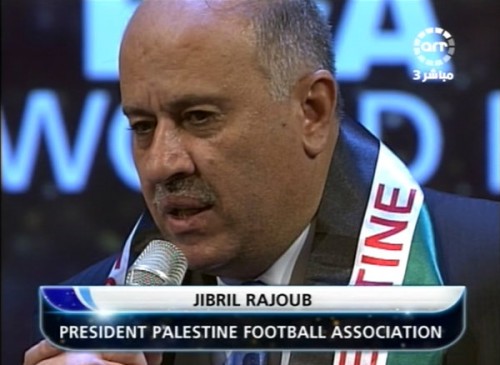 In a letter addressed to UEFA President Michel Platini,  Palestinian Football Association (PFA) President Jibril Rajoub expressed concern over the fate of three players, Palestine midfielder Mahmoud Sarsak, Goalkeeper of the Palestinian soccer team Omar Abu Rois and Ramallah player Mohammed Nimr, all of whom are being held by Israel without charge or trial.

“We are deeply concerned about the situation of our footballers,” Rajoub wrote in the letter, dated June 12, according to AFP.

“We ask your excellency not to give Israel the honour of hosting the next UEFA U21 Championship in 2013,” he added.

Israel is set to stage the eight-nation tournament across four venues from June 5 to 18 next year, according to AP.

Israel was amongst the Five candidates bidding to host the final tournament – Bulgaria, Czech Republic, England, Israel and Wales. The UEFA executive committee voted for Israel in January 2011.

Mahmoud Sarsak has been on hunger strikef for 90 days now in protest at his indefinite detention without charge or trial. Doctors say that Sarsak, who was arrested 3 years ago while on his way to play for the national team, is on the verge of death. In late March, he began refusing food in a protest which has continued until now, despite a brief pause in mid-April.

Abu Rois was snatched by Israeli forces in February while working at the Ramallah offices of the Red Crescent, with the military accusing him and 12 others of firing at an Israeli army patrol in the city’s Amari refugee camp, the letter said, according to Al Jazeera.

Nimr, who plays for Amari football club, was also arrested in February.

Amnesty International has also criticised Israel for its use of “administrative detention” in order “to suppress legitimate and peaceful activities in the Palestinian territories”.

Campaign groups in Scotland, including Friends of Al-Aqsa and the Scottish Palestine Solidarity Campaign (SPSC) say “there should be no business as usual for Israel’s national teams while Israel denies Palestinians the same privileges.” More than 300 Palestinians are currently being held under administrative detention. Administrative detainees are brought before a military judge, who sets the term of detention up to a maximum of six months. This period, however, may be repeated indefinitely.