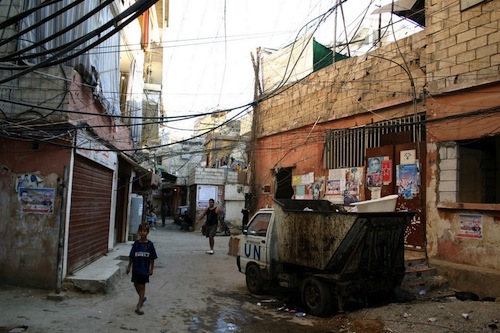 The top United Nations envoy in Lebanon saw first-hand the daily challenges facing Palestinian refugees as well as the world body’s efforts to address them, during a visit to one of 12 official refugee camps in the country.

“The United Nations is committed to continue working to help improve the humanitarian and socio-economic conditions of the Palestinian refugees in Lebanon in full coordination with the Lebanese authorities,” said the UN Special Coordinator for Lebanon, Derek Plumbly.

Plumbly toured the Burj Barajneh camp in the Lebanese capital, Beirut, with representatives of the UN Relief and Works Agency for Palestine Refugees in the Near East (UNRWA) to examine the humanitarian and living conditions in the camp.

It was the first visit to the camp for Plumbly, who toured several facilities and was briefed on the living conditions of over 17,000 registered refugees in the camp. Representatives of the camp also raised a number of concerns of the Palestinian refugee population in Lebanon, in relation to the right to work and other areas.

Lebanon’s parliament passed legislative measures two years ago to expand the right to work for Palestinian refugees, but they have yet to be implemented. UNRWA has repeatedly called for the measures to be acted on, stressing that they will help to ensure the socio-economic rights of a population that numbers almost half a million people.