Panetta: US to reposition forces in 17 places in Middle East 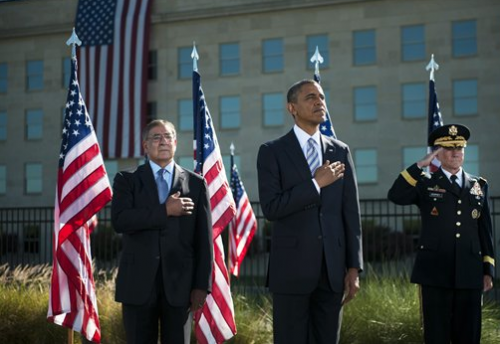 Defense Secretary Leon Panetta said the US is repositioning military forces in as many as 17 to 18 places in the Muslim world to better respond to the unrest that an anti-Islamic film has sparked.

“We have to be prepared in the event that these demonstrations get out of control,” Panetta told the Foreign Policy magazine.

The Pentagon, in response to a wave of anti-American protests spreading in countries of the Middle East, has planned to beef up its security at the U.S. Embassy in Khartoum, Sudan, following 100 marines sent to Libya and Egypt after the Sept. 11 attack on the U.S. Consulate in Benghazi that killed four State Department employees, including U.S. Ambassador to Libya J. Christopher Stevens.

Protests began earlier this week in Libya and at the U.S. Embassy in Cairo over what was reportedly an American-produced film posted on the Internet considered insulting to the Prophet Mohammed. Since then, there have been reports of protests in other countries in the Middle East, including at the U.S. embassy in Tunisia and the German Embassy in Sudan.

Travel alerts posted on the State Department website are advising Americans to exercise caution because of possible demonstrations elsewhere, including in Kuala Lumpur, Malaysia, and Jakarta, Indonesia, accoridng to a statement by Pentagon.

About ongoing protests in Cairo at the U.S. Embassy there, Pentagon Press Secretary George Little  said “the situation hasn’t to this point necessitated a change in security posture. Naturally, we stand ready to support our State Department colleagues if a request for additional military support comes through.”

In Afghanistan, protests so far have been peaceful, he said.

“We’re gratified based on what we know now,” Little said, “that religious leaders have appealed for nonviolent protests … so for at the moment we have not seen outbursts of violence against our diplomatic installations or military bases in Afghanistan.”

In Libya, he added, “we are continuing to investigate what happened and, if asked, support the president’s call to deliver justice.”

He said the department is in communication with State Department colleagues to discuss military support to embassy and consulate security around the world, but that it is premature to reach final conclusions about the recent violence against U.S. diplomatic posts in Libya, Cairo and elsewhere or about who is responsible.

The bodies of Chris Stevens, the US ambassador to Libya, Sean Smith, Glen Doherty and Tyrone arrived in the US on Friday, accoridng to news reports.

“They had a duty and they believed in it, they lived the American ideal with courage, the hope and the ideals of the fundamental American beliefs,” President Barack Obama was quoted as saying at a ceremony in Andrews Air Force base in Maryland, in honour of the victims, according to Al Jazeera.