Posted on: May 2nd, 2012 by AlYunaniya Staff No Comments

Papademos to hold final cabinet meeting; Greece has to strive to remain in Eurozone 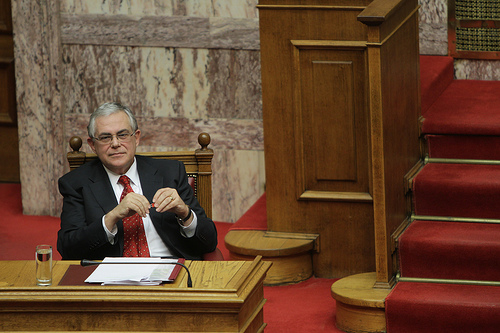 Prime Minister Lucas Papademos is due to hold his final cabinet meeting today.

Media reports quoting sources close to the Prime Minister as pointing out that Greece’s loan agreement with the European Union and the International Monetary Fund bind the next government to certain immediate obligations. According to Kathimerini, these include the overhaul of the tax system, the reform of the public procurement process and sweeping changes to the justice system. In total, there are some 70 requirements that have to be completed before the end of June, including the sale of Public Power Corporation lignite units.

Apart from that, any government is formed after the May 6 elections will have to agree with the EU and the IMF another 11.5 billion euros of savings for 2013 and 2014.The fact that reminders about these imminent commitments apparently came from the prime minister’s office was seen by some as an attempt by Papademos to intervene in the election campaign just days before the polls. Government sources however deny that any of the premier’s aides had made such comments.

They added that given the tense atmosphere ahead of Sunday’s vote, Papademos will simply repeat today the message he delivered last week, which is that Greece has to strive to remain in the Eurozone and the European Union. The Cabinet is also expected to approve the release to Greek banks of 18 billion euros’ worth of European Financial Stability Fund bonds that are currently held by the Hellenic Financial Stability Facility, according to Naftemporiki.gr.

The list also includes pending issues that ministers will deliver to their successors a few days after the elections.