Posted on: May 12th, 2012 by AlYunaniya Staff No Comments 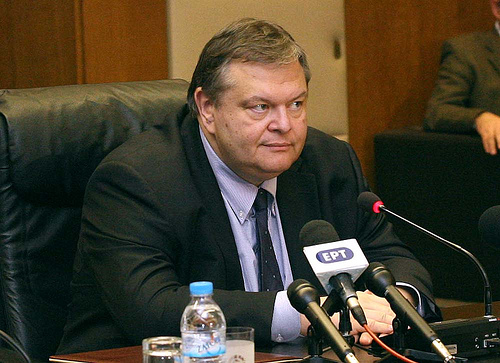 Greece’s politicians have failed to agree to form a new government and unless Karolos Papoulias convinces them to agree on a cabinet, which seems unlikely, he must call a new election for mid-June (most likely June 10 or June 17).

Greece’s socialist PASOK leader and former finance  minister, Evangelos Venizelos, was unsuccessful Friday in his  negotiations to form a coalition government and will hand in his  mandate Saturday morning.

“The truth for all has come. I will inform tomorrow President Papoulias.” Venizelos said according to a televised speech by SKAI TV.

“I  hope everyone will think more sensibly  during the party leaders meeting called by the president” , he added.

Earlier Friday, Venizelos held talks with SYRIZA party leader, Alexis Tsipras which has campaigned against the bailout, but there was no  agreement.

Syriza’s Tsipras once again said he will not participate in any  coalition with the two pro-austerity parties, referring to PASOK and ND. Meanwhile, he rejected accusations from ND’s Samaras that SYRIZA has an anti-European stance or is threatening to push Greece out of the euro, Kathimerini reported.

“ It seems as two main parties have not understood the results of the elections. It is not the Left Coalition that has refused the austerity measures but the Greek people who did so with their vote on Sunday,” Alexis Tsipras said after talks with Venizelos.

The European single currency hit its lowest point since January near $1.29, while the Athens stock exchange fell more than 4 percent to its lowest level since 1992, according to Reuters.

Greece is now deep into political crisis that could reject austerity measures and eventually force the debt-laden nation to leave the euro single currency union.

Venizelos is due to return his exploratory mandate to Papoulias on Saturday, after which the president will call each of the party leaders. It is possible the talks will take place on Monday. If no deal is reached, a caretaker government will be appointed. It will be headed by the president of the Supreme Court, Council of State or the Court of Audit, Kathimerini reported.