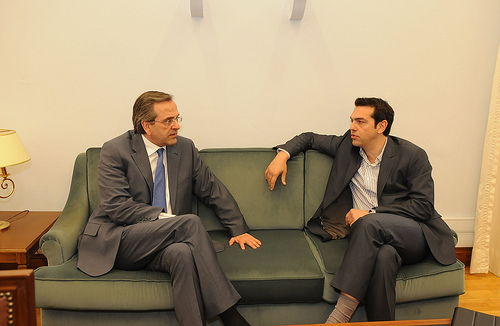 Polling stations in Greece have opened for the most crucial vote in 40 years while European leaders urge Greeks to vote with their heads.

Voters face a stark dilemma as Conservative New Democracy and leftist SYRIZA are competing neck and neck for first place in the elections, offering opposite views on how to cope with the country’s economic crisis.

New Democracy wants to stick with Greece’s pledges for further cutbacks and reforms, although with revisions, and the International Monetary Fund so Greece can continue to receive bailout loans to repay its public debt and cover some of its spending.

SYRIZA has vowed to rip up Greece’s bailout agreements, also known as memorandum, and cancel the austerity measures, which have included deep spending cuts, as well as tax hikes and tough pension and salary cuts.

The last opinion polls published before a two-week pre-election ban showed the radical left Syriza party of Alexis Tsipras running neck and neck with the conservative New Democracy party of Antonis Samaras, which would grant the winning party an extra 50 seats in Parliament vital for forming a coalition government. Neither party is likely to win an outright majority.

The bailout would not be renegotiated, said Angela Merkel, Germany’s chancellor, whose country’s wealth is necssary to support  its weaker partners in the eurozone, urging Greeks to sticks to their bailout commitments.

“That’s why it’s so important that the Greek elections preferably lead to a result in which those that will form a future government say: ‘yes, we will stick to the agreements’,” Merkel told a party conference of her Christian Democrats, Al Jazeera reports.

Jean-Claude Juncker, the head of the group of eurozone finance ministers and prime minister of Luxembourg, warned there would be serious effects if SYRIZA secured victory.

Sunday’s vote is a rerun of a May 6 election that produced stalemate. No party is expected to win enough votes to secure a majority in parliament.

The first “safe” estimate based on actual votes counted is due at about 9.30 p.m.