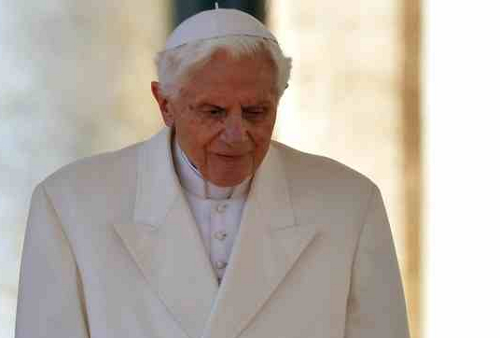 Tired,  emotional, Pope Benedict XVI bade farewell to a huge crowd gathered in the Vatican’s St. Peter’s Square, and acknowledged that his nearly 8 years as head of the Roman Catholic Church have not always been easy.

Benedict, whose years as pope have included further revelations about sexual abuse scandals involving priests and have been marred by questions about his management skills, said that while “the Lord has given us many days of sunshine and gentle breeze, days in which the catch has been abundant;  there have been times when the seas were rough and the wind against us.”

He publicly acknowledge that his decision to retire was guided by his fragile health.

“I took this step in the full knowledge of its gravity and rarity but with a profound serenity of spirit,” Benedict said to the audience listening to him, mute. And, he added, loving the church means “having the courage to take difficult and anguished choices, always having in mind the good of the church and not oneself.”

According to Mark Memmott of NPR “tens of thousands of people toting banners saying ‘Grazie!’ — ‘thank you’ — jammed the piazza to bid farewell to the pope at his final general audience — the appointment he has kept each week to teach the world about the Catholic faith.”

The Whispers in the Loggia blog, that follows Vatican news closely, says as many as 200,000 people may have been gathered in the square.

John Allen, senior correspondent for the National Catholic Reporter, told CNN that most of the 100+ cardinals who will cast votes for the next pope are already in Rome. He believes they will meet Monday in what’s known as a “general congregation” to set a date for the conclave — the session at which they vote for a pope. Allen expects the conclave will start “sometime around the 8th or 9th of March.” The cardinals’ goal will be to have a pope chosen before Palm Sunday, which this year falls on March 24.

We shall wait, and follow the will of God, even if Benedict concluded his speech revealing us that sometimes “the Lord seemed to sleep.”