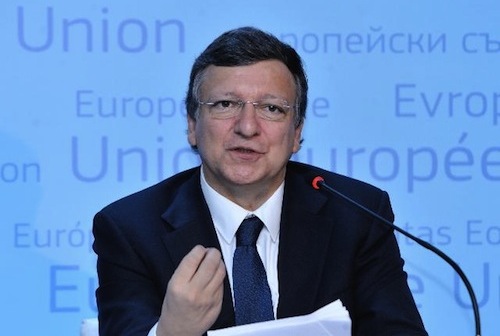 “The last weeks have been a time of heightened tension in the European Union and in the Euro area in particular. It is now clear that the world expects Europe to commit to credible and concrete solutions to become more integrated and more united. Indeed this is now a real systemic global necessity if we are to ensure worldwide financial and economic stability.

We are now in a defining moment for European integration. We must articulate the vision of where Europe must go, and a concrete path for how to get there. I am not sure whether the urgency of this is fully understood in all the capitals of the European Union.

We must be realistic in what we can expect from one single summit of European leaders. But I believe this European Council can – and indeed must – give strong impetus to our growth agenda, through concrete measures to stimulate the economic activity, while also setting out a longer-term process to build a stronger, genuine Economic and Monetary Union.”

Referring to immediate measures, namely measures to stimulate the economy, Barroso said “we need both fiscal consolidation and growth. This growth can only come from the combination of sound public finances, deep structural reforms and targeted investment. We should not forget trade, internal and external, that IS, and must remain, an important source of European growth.

We expect Member States to agree to a “comprehensive package” of growth measures. These are significant measures that the Commission has been proposing over the last year and that will be backed by Europe’s Heads of State and Government, for example the increase on the EIB lending capacity, project bonds and a more targeted use of the EU structural and cohesion funds.

In addition, Member States should endorse, in full, the Country Specific Recommendations that the Commission set out on 30 May. These reforms are about changing head-on practices that impede our competitiveness and stop our markets working as they should.

The measures in this growth compact are major decisions that will tackle the roots of Europe’s problems, while at the same time oiling the wheels of the economy through targeted investment to get it moving again. Indeed, to complement the crucial reform effort, we must invest in projects and in areas where money is badly needed to spur growth.”

Barroso said: “the report that we will present at the European Council is the start of the process towards deeper integration with a focus on those Member States which share the single currency. It builds on the bold efforts towards greater stability, coordination and growth that the European Union has taken since the start of the crisis. It seizes the moment to put these efforts in the perspective of a full Economic and Monetary Union, in particular the Euro area, and identifies the main building blocks of such an endeavour. It is a concrete demonstration of our unwavering commitment to the single currency and to the European project.

This integration process should be progressive. It should start with steps that can be taken immediately without a Treaty change. These would lead to longer term steps that may require such changes. At its heart will be a guiding concept – that greater solidarity and greater responsibility must go hand in hand: each step towards further solidarity would be accompanied by a corresponding step towards greater responsibility. At its heart will be a guiding method – the Community method that ensures democracy, legitimacy, accountability and inclusion.

What is at stake is not only the economic integration, it is also the overall economic confidence in the Euro area, and indeed, our commitment to the European project. This is why we need to be bold and define the way forward.

For a genuine Economic and Monetary Union to be established, I think that we need a “banking union”, a “fiscal union” and further steps towards a “political union”.”