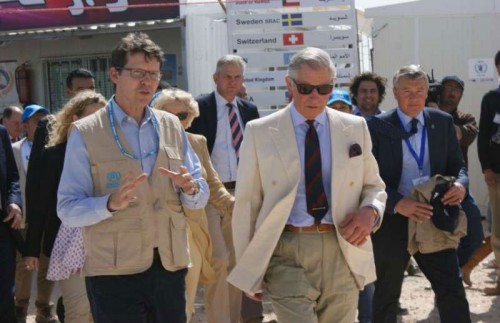 Prince Charles of Wales and Camilla, the Duchess of Cornwall, yesterday met with United Nations staff assisting Syrian refugees in a camp in Jordan during a visit that coincided with urgent calls from the head of the UN refugee agency (UNHCR) for emergency funding to aid more than one million Syrian refugees and another two million people displaced inside Syria.

Accompanied by Jordan’s Prince Ghazi bin Mohammad, Prince Charles and his wife paid an hour-long visit to the Prince Abdullah Park, where they toured the camp’s health clinic and aid distribution points, and examined pre-fabricated shelters provided by UNHCR to Syrian refugees.

The heir to the British throne praised the relief efforts and expressed “enormous respect for what Jordan and the humanitarian community have done for refugees … The Jordanian people are truly remarkable in what they manage to cope with.”

“It’s remarkable what UNHCR and others are doing to try and deal with this unbelievably difficult and heart-breaking situation,” he added.

In a conversation with one of the families taking refuge in the camp, 55-year-old Musa told the royal couple that he decided to flee Syria with his wife and five children last September after he was arrested and tortured.

Also on Wednesday in Jordan, the UN High Commissioner for Refugees, António Guterres, called for additional financial aid, warning that a lack of funding could destabilize the entire region.

“This is not just any crisis. It requires a special mechanism of support,” Mr. Guterres told journalists in Amman, following meetings with Prime Minister Abdullah Ensour and Foreign Minister Nasser Judeh.

“There is no way this can be funded by normal humanitarian aid budgets,” he noted, warning that “the consequences could be devastating for the Syrian people and for regional stability” if significant new funding was not forthcoming.

The UN Office for the Coordination of Humanitarian Affairs (OCHA) has said the $521 million Syrian Humanitarian Assistance Response Plan was at least 21.5 per cent funded, which includes $200 million pledged at the January donor conference in Kuwait.

Syria has been wracked by violence since the uprising against President Bashar al-Assad began in March 2011. Up to 70,000 people have died, more than 1 million have fled to neighbouring countries, and 2 million have been internally displaced.