Posted on: October 23rd, 2012 by AlYunaniya Staff No Comments 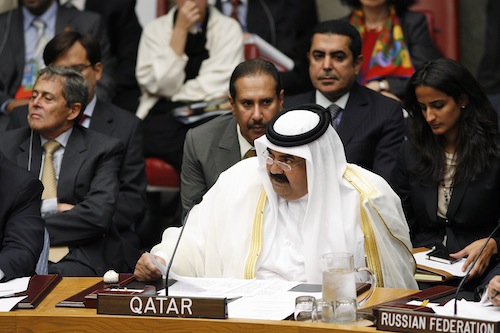 Sheikh Hamad bin Khalifa al-Thani, the emir of Qatar, is set to arrive in the Gaza Strip to inaugurate a $254-million Qatari investment project to rebuild the enclave becoming the first head of state to visit the Hamas-run enclave since Israel imposed a siege on Gaza in 2007.

The Emir is set to enter the Gaza Strip by land from Egypt given that Gaza has no airport or seaport, as Israel controls all the other crossing points.

The visit hailed as “very important” comes during a spike in tension between Israel and Hamas, whose armed wing on Monday threatened revenge for Israeli air strikes that killed one of its men and at least one other militant, AFP reported.

The Qatari investment project aims to rebuild the Gaza Strip, which endured damage during a huge 22-day Israeli military operation in December 2008 and January 2009.

The investment project seeks to build 1,000 homes for poor families in the devastated Khan Younis area in the south of the Strip.

“He is the first Arab leader to break the political siege.

Israel commented on the visit also. “We find it weird that the emir doesn’t support all of the Palestinians but sides with Hamas over the Palestinian Authority (in the West Bank) which he has never visited,” foreign ministry spokesman Yigal Palmor told AFP on Monday.

“The emir has chosen his camp and it is not good.”