Rasmussen: NATO has plans to defend Turkey from Syria if necessary 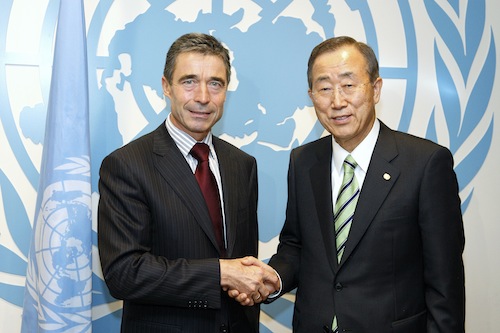 The head of NATO on Tuesday threw his support behind Turkey saying that it can rely on the alliance, which has all necessary plans in place to defend Turkey from Syria if necessary.

“We have all necessary plans in place to protect and defend Turkey if necessary,” Secretary-General Anders Fogh Rasmussen told reporters before a meeting of the alliance’s defence ministers in Brussels.

Rasmussen applauded the Turkish government for its restraint, saying he hoped the parties would avoid an escalation of the crisis.

“Obviously Turkey has a right to defend herself within international law,” he said.

The incident has been the most serious outbreak of cross-border violence since Syria’s uprising against President Bashar al-Assad erupted 18 months ago.

Recep Tayyip Erdogan, Turkey’s prime minister, in addressing parliament on the issue on Tuesday, said that his country does not want war, but that Turkey needs to be prepared for anything

Rebels have taken control of the strategic town of Maarat al-Nuaman, which lies on the main north-south highway in the northern province of Idlib, after a 48-hour battle with soldiers, according to rebels and activists.

At the same time, rebel suicide bombers struck overnight at an Air Force Intelligence compound on the outskirts of the Syrian capital Damascus, killing at least 100 people, activists said on Tuesday.

The militant Islamist group al-Nusra Front said it had mounted the attack because it was used a centre for torture and repression in the crackdown on the 18-month-old revolt against President Bashar al-Assad, Reuters reports.

The British-based Syrian Observatory for Human Rights, which monitors the violence, said 90 people had been killed so far on Tuesday, including 29 soldiers, compared to a death toll of 210 on Monday, Al Jazeera writes.