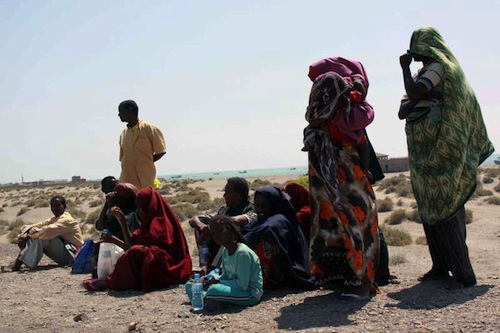 A record number of refugees and migrants arrived in Yemen during the first half of this year, the United Nations said, while also warning that it is increasingly dangerous for people to make the trip by boat from the Horn of Africa, and once in the country, they face many challenges such as sexual abuse and exploitation.

The UN High Commissioner for Refugees (UNCHR) said that during the first six months of 2013, more then 46,000 refugees and migrants arrived in Yemen, a country that has received close to half a million refugees since 2006.

“UNHCR staff and our partners, such as the Yemeni Red Crescent and the Danish Refugee Council, work daily to record new arrivals and offer them support,” UNHCR spokesperson Melissa Fleming told reporters in Geneva. “That help takes many forms, including food and water, first aid and transportation to transit and reception centres, hot meals, welcome packages including blankets and clothing, accommodation and counselling.”

Fleming said UNHCR had witnessed a significant change in the refugee and migrant population arriving in Yemen over the past two years, with more arrivals from Ethiopia. Previously, Somali refugees made up between one-third and one-quarter of total arrivals. Other arrivals come from Djibouti and Sudan, she said.

“Refugees and migrants are vulnerable to exploitation, violence and sexual abuse at all stages of their journeys,” Fleming said. “Boats crossing the Arabian Sea or Red Sea to Yemen are often overcrowded. Smugglers may force passengers into the water to avoid detection. Smugglers and traffickers often wait on the coast to receive the new arrivals.”

The Government of Yemen automatically recognizes Somali arrivals as refugees, while UNHCR determines the refugee status of Ethiopians and other nationals. Fleming said few Ethiopians seek asylum as many want to travel beyond Yemen or do not know how the asylum process works.

“As a result, most Ethiopians are left extremely vulnerable,” she said.

Fleming said there have been positive developments, as the number of dead or missing refugees and migrants has dropped significantly – to five people so far this year from 43 in all of 2012. Yemeni authorities have also had some success in locating smugglers’ and traffickers’ bases and cracking down on their operations.

“We are also engaged with the Yemeni Government and national and international partners. Together we are working to enhance services offered to refugees, asylum-seekers and migrants as well as find sustainable solutions,” she added.