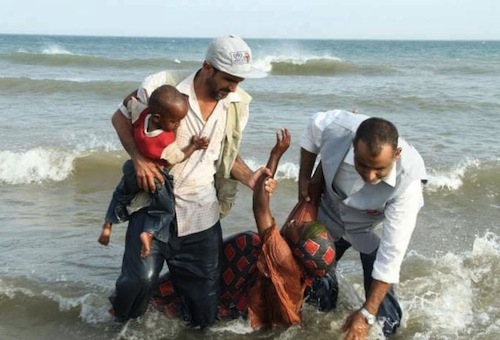 A record 107,500 African refugees and migrants made the dangerous journey from the Horn of Africa to Yemen in 2012 – the largest influx into Yemen since 2006 when the United Nations refugee agency began compiling these statistics.

“Despite economic and security difficulties, Yemen has continued to receive and host a record number of people fleeing the Horn of Africa in search of safety, protection and better economic conditions,” Adrian Edwards, spokesperson for the UN High Commissioner for Refugees (UNHCR), told reporters in Geneva.

The previous record high was in 2011, when more than 103,000 people arrived in Yemen by sea, the agency noted. Eight of every ten arrivals last year were Ethiopian nationals (over 84,000 arrivals), while Somali refugees constituted the rest. Many migrants use Yemen as a transit stop en route to other Gulf States.

Mr. Edwards said that all Somali arrivals are automatically recognized as refugees by Yemeni authorities, while UNHCR conducts refugee status determination for Ethiopians and other nationalities seeking asylum in Yemen.

“A very low percentage of Ethiopian arrivals decide to seek asylum in Yemen, partly due to a lack of awareness and access to asylum mechanisms, or do not meet the criteria to be recognized as refugees,” he stated.

“However, for the vast majority of Ethiopian migrants protection space is nearly non-existent and they are often extremely vulnerable.”

Boats crossing to Yemen are often packed beyond capacity and smugglers, in order to avoid the Yemeni coast guard, force passengers into the water, often far from the shores and with tragic consequences, according to UNHCR.

“Some exhausted passengers are unable to swim and drown,” said Mr. Edwards, noting that at least 100 people are estimated to have drowned or went missing in various incidents and shipwrecks in the Gulf of Aden and the Red Sea in 2012.

Even those who make it to shore face challenges such as exploitation, violence and sexual abuse, he added.

Yemen is a historic transit hub for migrants, according to UNHCR, and stands out in the region for its hospitality towards refugees. The country currently hosts over 236,000 refugees, virtually all of them of Somali origin. There are also more than 300,000 internally displaced Yemeni civilians in the north due to recurring conflict since 2004.