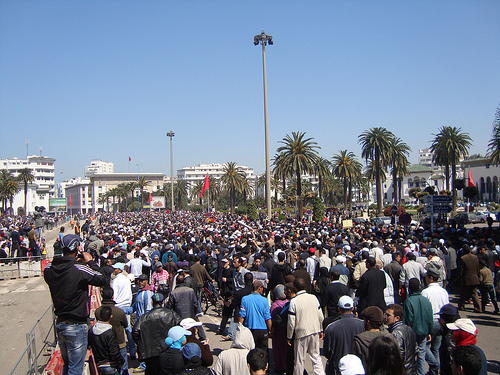 Two years after thousands of people took to the streets of Rabat, Casablanca and other cities in Morocco calling for reform, repression of protests in Morocco remains routine, said Amnesty International.

To this day, dozens of activists affiliated with the 20 February movement are reported to be detained for peacefully expressing their views. Some have said they were tortured and ill-treated in custody.

The 20 February movement, which was formed in the wave of popular uprisings in the Middle East and North Africa region, demands greater respect for human rights and democracy, better economic conditions and an end to corruption.

“It is unfathomable that the authorities continue to violently suppress critics in blatant disregard of the new constitution adopted in July 2011, which guarantees the rights to freedom of expression, peaceful demonstration and association,” said Ann Harrison, Deputy Director of the Middle East and North Africa programme.

“Ostensible reforms launched by the Moroccan authorities appear to be designed to shake off criticism from international partners while the authorities continue to suppress protests.”

One the members of the 20 February movement, Youssef Oubella, 24, was arrested at a demonstration in July 2012 in Casablanca. He told Amnesty International that police officers had beaten, insulted and tortured him during his arrest and in police custody. He said he had been forced to sign a statement declaring he had hit a police officer.

In September 2012, Oubella and five other members of the movement were sentenced to up to 10 months imprisonment for insults and violence against police officers. All said they had been tortured or otherwise ill-treated. They were released in January 2013.

Mohamed Messaoudi, a lawyer who has worked on many cases of activists linked to 20 February movement, said he had recently noticed increased state repression of the group’s demonstrations. He told Amnesty International that the authorities routinely charged those arrested with offences such as insults and/or violence against police officers, drug trafficking and participating in an unauthorized demonstration.

Mohamed Messaoudi said the ill-treatment of activists during and following their arrest is widespread, and that the torture Youssef Oubella described is far from being an isolated case.

Rap singer, Mouad Belghouat – another member of the 20 February movement – was arrested in March 2012 and charged with insulting the police after a video of a policeman wearing a donkey head was posted on the internet to one of his songs denouncing police corruption.

He was sentenced to one year’s imprisonment, a sentence upheld by the Casablanca Court of Appeal in July 2012. He has been on hunger strike at least twice to protest against his detention conditions. He remains in Oukacha prison in Casablanca.

“So far, the Moroccan authorities have acted against – not for – the rights of people. Peaceful protests must be allowed to take place without harassment or repression, and in no event must protesters or others be arrested and detained arbitrarily. Any allegations of ill-treatment or intimidation must immediately be investigated and anyone found responsible brought to justice,” Said Harrison.

“It is also crucial that those arrested have immediate access to a lawyer, as they are at particular risk of torture and other ill-treatment in the first hours following their arrest.”

Following his visit to Morocco and Western Sahara in September 2012, Juan Méndez, the UN Special Rapporteur on torture and other cruel, inhuman or degrading treatment or punishment, stated that although the Code of Criminal Procedure guarantees access to a lawyer, “…that guarantee is neither fully respected in law nor in practice. The detainee only has access to a lawyer of his choice 24 hours after arrest, for 30 minutes in the presence of an investigator.”

Amnesty International is calling on Morocco to amend its laws to ensure that detainees have effective access to a lawyer of their choice from the outset of and throughout their detention, and that they can consult their lawyer in private.