Posted on: September 1st, 2016 by AlYunaniya Staff No Comments

Rhodes Conference for Security and Stability 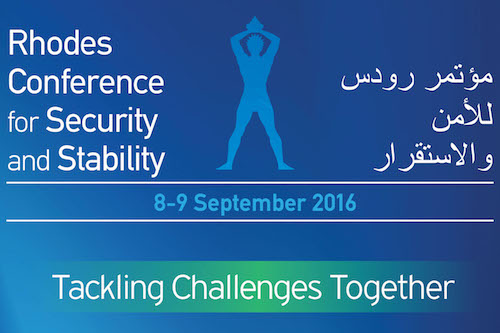 This initiative, launched by Minister of Foreign Affairs, Nikos Kotzias, paves the way for the establishment of an annual forum for dialogue, aiming to deepen cooperation among the key players in a region plagued by security challenges and destabilizing forces on the premise that no single country can tackle the problems of this day and age.

This Conference will stress the need for collective action as it is imperative to act together in order to safeguard security and stability for the entire region.

The so-called triangle of instability, formed by Ukraine to the apex and Libya and Syria/Iraq to the western and eastern corner respectively, has adverse effects on the Eastern Mediterranean, the wider Middle East and Southeast Europe. The ongoing refugee/migration crisis, extremism and radicalization are indicators of the current critical situation in the broader region.

The Rhodes Conference is based on a political vision; to build stability and security via joint initiatives and synergies in order to avert fragmentation and bring prosperity and peace.

This includes the growth of relations and movements, which will lead to higher levels of interdependence. That is the building of academic and cultural networks aimed at overcoming stereotypes and misconceptions, as well as people-to-people exchanges – bridges between cultures – that promote understanding and respect for diversity.

In the same vein, economic cooperation in a modern globalized world requires synergies and connectivity in the sectors of trade, energy and transport;

Our will is to achieve positive sum cooperation, aspiring to remedy uneven development and inequality, the root causes of turbulence and hatred.

Hence, the agenda of both plenary sessions on September 8th and 9th respectively, shall define the current challenges we are faced with in order to forge joint strategies to meet:

• ongoing threats to the region’s cultural and religious plurality, including the root causes of radicalization and violent extremism.

The Rhodes Conference for Security and Stability will seek to highlight the vital need for states to show a real commitment and political will to deter all these destabilizing forces that engender suffering and unrest threatening security and stability.”