Posted on: January 23rd, 2013 by Dimitris Ioannou No Comments 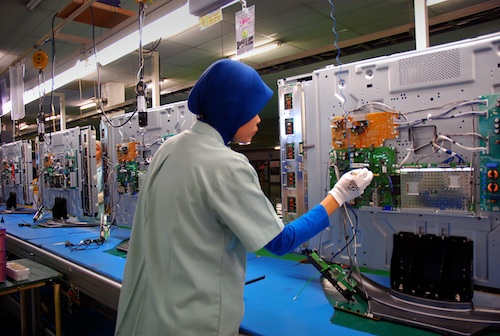 The number of middle-class workers in the developing world has risen sharply over the past decade, potentially creating a much-needed boost to future growth and consumption in these economies.

New figures in the ILO’s Global Employment Trends 2013 show that 42 per cent of workers in developing countries – nearly 1.1 billion workers – are now “middle-class,” living with their families on more than US$4* per person per day. The rise is particularly marked in East Asia.

Since 2001, an additional 400 million workers have joined the ranks of the middle- class, with their incomes sufficient for their families to consume between US$4 and $13 a day per person. This is a doubling of the number of workers in the emerging middle class. A further 186 million workers are now living on more than $13 a day.

By 2017, the ILO estimates that an additional 390 million workers in the developing world could be middle-class.

“Over time, this emerging middle-class could give a much needed push to more balanced global growth by boosting consumption, particularly in poorer parts of the developing world,” said Steven Kapsos, one of the authors of the report.

The rise in the middle-class has been matched by a fall in the numbers of workers living in extreme poverty – living on less than US$1.25 a day. Some 397 million workers now fall in this category – a drop of 281 million since 2001.

But the number of “near poor” -those living on between US$2 and $4 a day – has increased by 142 million in the past decade, making a total of 661 million people.

Many of these “near poor” are not covered by social insurance, and risk slipping back into poverty in the event of an economic crisis.

In South Asia, 92 per cent of the workforce is either poor or near poor, while in Sub-Saharan Africa, 86 per cent of workers are in these categories.

“Much work remains to be done to raise productivity levels and expand the number of quality jobs, in order to spur the growth of the developing world’s middle class.Unfortunately, the crisis affecting global labour markets threatens to slow progress,” concluded Kapsos.