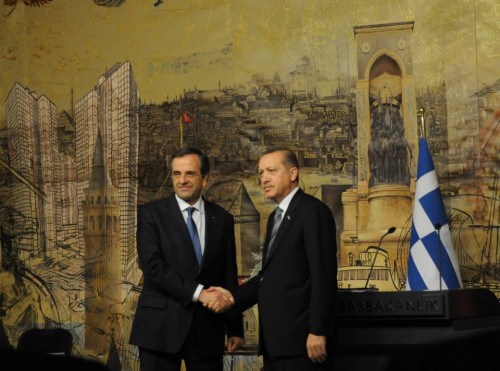 Summarising the results during joint statements with the Turkish premier, Samaras said it had been “a good day for relations between the two countries,” AMNA reports from Istanbul.

During this joint press conference, Erdogan reported that they had shared a “common conviction based on the principles of a win-win solution,” that there should be “steps for an Exclusive Economic Zone in the Eastern Mediterranean.” Samaras, however, stated that this was “not the time to go into details” on this issue and that Greece “reserved the rights arising from international law.”

Samaras stressed that Greece, in spite of the crisis, remained a stable factor for peace and security in the region, adding that the meetings aimed to build up good neighbour relations and attempt to resolve differences.

On the issue of the continental shelf, he said this was a subject of exploratory talks between the two sides and emphasised Greece’s commitment to international law and international treaties. “We are establishing relations of mutual respect. The golden rule for a good relationship is mutual respect, national sovereignty and respect for international law,” Samaras underlined, according to the agency.

The Premier expressed Greece’s support for Turkey’s full accession to the European Union, stressing that this was a “fixed point of reference” but one requiring that Turkey fully comply with all the obligations of an EU candidate state. He said that Greece wanted a solution to the Cyprus problem that respected European rules and regulations, international law and the decisions of the UN Security Council.

The Turkish Prime Minister described yesterday’s meetings as “very useful” and stressed that the number of agreements signed, as well as the 22 agreements signed in 2010, “are indicative of the progress we have made in areas of cooperation”.

“Greece and Turkey are neighbouring countries and are fulfilling their obligations. Neighbourhood has obligations,” he said, adding that the meeting had served to “examine the issues that have been realised and those that can be realised.”

Erdogan said: “We believe the constructive atmosphere between our countries, the mutual understanding and good-neighborliness will strengthen our ties further,” he said. The Turkish prime minister added, however, that “there are still issues we do not agree on and our disagreements may be significant, but we are trying to forge relations of mutual respect.”

On the issue of a state mosque in Athens, which Ankara recently offered to sponsor, Samaras said that a Greek state project for an official state-backed place of worship for Muslims in the Greek capital was in the works.

The premiers co-signed 25 bilateral agreements on issues ranging from trade to tourism to natural disaster relief. Erdogan said the goal was to double last year’s 6.5 billion euros in bilateral trade this year. He said Ankara wanted to contribute to Greece’s economic recovery, declaring that “Greece’s problems are our problems.”