Posted on: March 4th, 2013 by Julie Jalloul No Comments 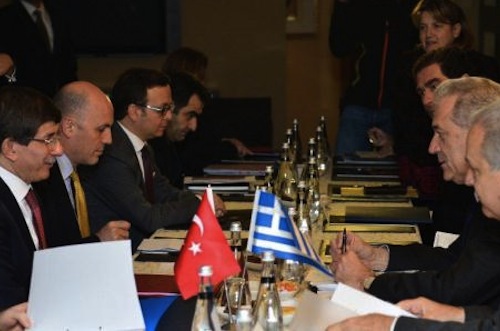 The construction of a Mosque in Athens is expected to be amongst the topics discussed between Greek Prime Minister Antonis Samaras during and his Turkish counterpart Recep Tayyip Erdogan in Istanbul.

According to Turkish daily Hurriyet, Samaras and Erdogan had already discussed about the stalled plans for the construction of a mosque in Athens in a 40-minute summit in Doha, Qatar, a few weeks earlier. Erdogan had then announced that he had offered Turkish help for the building of the house of worship, while adding that Samaras was “warm” to the idea, Hurriyet reported.

However, in Athens, Deputy Foreign Minister Costas Tsiaras has noted in Parliament that the building of the mosque would be done entirely by using the country’s own financial resources.

The issue has been a source of tension and a debate as the Greek government has faced strong criticism for its long indifference to the demands of the country’s Muslims to build a mosque in Athens.

Commenting on the subject Naim el Ghandour, President of the Muslim Association of Greece told Alyunaniya.com: “The Turkish Prime minister is a Muslim worshipper who wants to have a mosque in a country he visits just like any other worshipper. It is something logical. Greeks also built Greek Orthodox churches wherever they go. I know that better than anyone because I am from Egypt. Every major city in Egypt has a orthodox church and cemetery.”

He added: “The Greek government has given the ‘go ahead’ for the construction of a mosque for Muslims in Greece but this is never realized, because it simply fears losing votes from the far-right.”

Last September Parliament voted in favor of the construction of an Athens mosque without minarets. The plan calls for renovating an existing state building –on a disused navy base– in the industrial district of Votanikos near the center of Athens, according to Kathimerini. The plan commits the Greek government (Ministry of Education and Religious Affairs) to pay for the construction of a temporary mosque until the works are concluded.

“If the Greek government doesn’t built a mosque for Greek Muslims then we will have to take the matter in our hands and look for foreign sponsors from countries like Qatar or Saudi Arabia to buy land and get a license to build an official place for worship. The constitution does not prohibit something like that as it guarantees freedom of worship,” Naim el Ghandour said. “But we don’t want it that way, this will be a Greek mosque for Greek Muslims,” he added.

The Greek capital is the only European capital that does not have an official place of worship for its 700,000 Muslim population.