Posted on: August 9th, 2013 by Dimitris Ioannou No Comments

Samaras-Obama meet at the White House 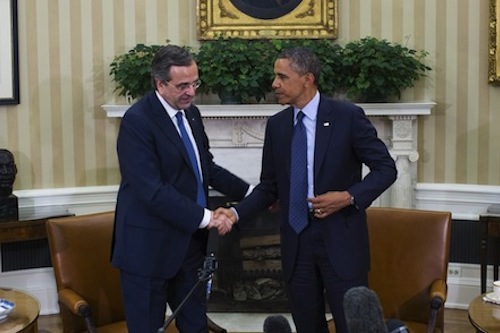 Prime Minister Antonis Samaras was received by President Barack Obama yesterday at the White House [10:00 p.m., Greek time] for a meeting that lasted for one hour.

According to AMNA, in statements made by the two leaders afterwards, the U.S. President expressed the view that Greece’s efforts to exit the crisis cannot be focused only on austerity but require growth and creation of new jobs. Obama spoke of the deep friendship existing between the two countries, making special reference to the Greek-American community.

Obama’s comments to the media in the Oval Office regarding the urgent need to tackle unemployment in Greece, which reached 27.6% in May according to figures published yesterday, met with Samaras’ approval. The Greek prime minister nodded as the US president made his point, Kathimerini notes.

According to primeminister.gr, addressing the media after the meeting, US President Barack Obama said:

“Our government owes a great debt to Greece, our form of government. The Greek-American community here are incredible businesspeople and political leaders and community leaders and great friends of mine. And that bond that extends beyond governments but goes to our peoples I think is what makes Greek-American relations so special.

Prime Minister Samaras comes here at a time when I think we’re all aware Greece is going through incredible challenges. And so far, the Prime Minister has taken some very bold and difficult actions to initiate the structural reforms that can help reduce the debt burden that Greece experiences but, even more importantly, can unleash the incredible talents of the Greek people so that they’re effectively competing in this new world economy.

We had an extensive discussion about the challenges that remain, and I’m confident that Prime Minister Samaras is committed to continuing on these structural reforms. What we also agreed to is that in dealing with the challenges that Greece faces, we cannot simply look to austerity as a strategy. It’s important that we have a plan for fiscal consolidation to manage the debt, but it’s also important that growth and jobs are a focus because we know from history that those countries that are growing, those countries where employment is high and people are increasing their productivity and feel as if the economy’s moving forward, those countries have an easier time reducing their debt burdens than countries where people are feeling hopeless.

And I think Prime Minister Samaras is committed to taking the tough actions that are required, but also, understandably, wants to make sure that the Greek people see a light at the end of the tunnel.

And what I expressed to him is that the United States wants to continue to be helpful and supportive in what will be a challenging process. But we’re confident that Greece can succeed. And, you know, the stakes are high for not only Greece but also Europe and the world economy.

We also discussed the strong bilateral military and intelligence cooperation between our two countries. Greece is a NATO ally. They have worked with us in preventing terrorist threats from actually happening. We have partnered on a whole range of issues. They are host for some of our very important military personnel and assets, and we are very grateful to them for that.

You know, there is a great opportunity as we speak for the decades-long conflict and tensions that exist in Cyprus to be resolved.

And I think we’re both encouraged by the messages that have been coming out of the Greek and Turkish Cypriot communities. And we’re going to be, I think, working very closely together to see if we can make progress on those fronts.

So this has been an excellent conversation. You know, we are very proud of the friendship and partnership that we have with the Greek people. We want to be as helpful as we can during this period of challenge, and we’re confident that the Prime Minister recognizes what needs to be done and is going to be working very hard to accomplish it.”

According to the previous source, Prime Minister Antonis Samaras said: “…We did have a very good conversation with the President and analysis on different areas.

I first of all want to say that our two peoples and our two countries have been more than allies. Not only did they fight next to each other throughout their history, always for a noble cause, but they cherish and they support the same values, like freedom, democracy and independence. So it’s good to be here.

In terms of the economy, yes, we’ve gone through thick and thin. The sacrifices made by the Greek people are huge, but they’re not going to be in vain because what we now need is development of jobs and growth. Of course, we are going to do what has to be done as far as structural changes are concerned, but our emphasis has to be on growth and on the creation of new jobs, especially for the youth, because as I told the President, in Greece, the unemployment for the youth has reached an incredible number of 60 percent, and total unemployment of 28 percent.

And the Greek people have sacrificed more than a quarter of the GDP only the last four years. So by definition, emphasis is on growth creation.

But the other thing I want to say is that if Greece succeeds – and it will succeed – our success story is going also to be a European success story. And I believe this is very important.

On the other hand, we are trying to do as much as we can to stabilize a very destabilized environment where we live. I believe that the region has many problems. We are going to try and solve as much as we can, establish this cooperation, which I think is important, on the areas that you have described, being always an advocate of international law wherever there are problems around. I believe that the problems have to do with illegal immigration, internal turbulence in various countries and even, unfortunately, the problem of terrorism.

And I think that there is a lot of synergies that we can have together in order to try and solve, as much as we can, those problems, including, as you said, the problem of Cyprus, which, after the new proposals of the Greek President, opens up a window of opportunity as long as we always, as I said, abide by the international laws and the decisions of the United Nations.

I would also like to say that I told the President that we have found huge energy resources in our great region. Cyprus, Israel and Greece can realign those resources in order to be able to satisfy the European demand, especially for natural gas.

And last but not least, I told the President that we will try to do as much as we can during the Greek Presidency in the first semester of next year with the help of the Italian Presidency that will follow in order to be able and conclude the trans-Atlantic Trade and Investment Partnership, which I think is very important, because as you know, Mr. President, Europe and the U.S. together, in this trade, account, as you’ve said before, more than 50 percent of the world GDP.

And therefore, it’s important, especially for Europe, to liberalize that potential and create new jobs, because I think jobs for everyone is the number one priority, especially to our youth, because everything we’re doing has to do with your younger generation…”