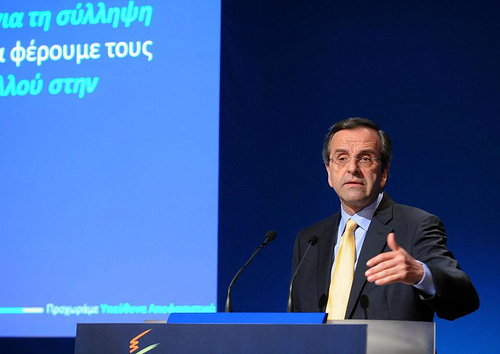 The citizens’ security as a condition for economic development was put forward by ND leader Antonis Samaras who presented yesterday “the twelve steps for the safety of citizens and tackling illegal immigration”. According to protothema.gr, Samaras stressed: “the safety of citizens is a precondition for democracy; no free city exists if it cannot protect its citizens from fear. Without security fear dominates, which constitutes the dissolution of democracy. That is a fact known well to the people of Athens, St. Panteleimon, Patras and other cities… Until a few years ago, the opinion that policing is a bad thing was the dominant one, but now that policing is eliminated crime is simple, organized and rampant. No one can be free when they fear for their family due to promiscuity and crime”.

ND’s 12 steps, as described by protothema.gr are:

- Change the law to arrest and convict an offender to introduce laws in effect in Europe. There are currently masked individuals caught and released and they are released due to doubts, and caught again, carrying Molotov cocktails, claiming that police officers planted them. Photography and filming during such episodes should be allowed, even to protect citizens.

- Policing methods that do not endanger human lives. Dealing with violent people like the black block is completely different from everyone else who is protesting.

- Use of water-carrying vehicles during protests.

- Bring back police officers in neighborhoods 1) to release police from bureaucratic procedures, 2) unify mechanized police forces, and 3) have helicopters for filming events.

- Consolidate and reinforce the headquarters against organized crime, which usually has many faces. There is an issue here with the involvement of police officers.

- Change the whole way of dealing with crime. Clemency has led to impunity. Those found guilty should stay in prison long enough.

- Relieve the pressure on prisons.

- Illegal alien convicts should be deported.

- Combat so-called low-level crime, which is the forerunner of major crime. Remove drug users from places in cities which they have occupied.

- There should be a national security doctrine which begins with threats against public safety and reach preventive mechanisms in the long-term.

Regarding illegal immigration, the ND president stated that it is not only economic immigrants, but also people who have committed crimes and enter the country illegally.

- Better guarding of borders with physical barriers such as the fences in Evros and use of technology like infrared cameras, which notify authorities. Better cooperation with FRONTEX is a must.

- Creation of accommodation centers where those crossing the borders and arrested for crimes will be channeled through.

- Europe-wide initiative by the European south for a single asylum policy and a single policy of repatriation of illegal immigrants. The EU should clarify things with Turkey. Set it as a term in the negotiations between Turkey and the EU.

- Strike against illegal trade, which is the main way that illegal immigrants make their living. We declare a war against black markets, which daily kill the legal trade even more.

- Asylum procedures will be expedited but accommodation centers will have better conditions.