Posted on: April 29th, 2012 by AlYunaniya Staff No Comments 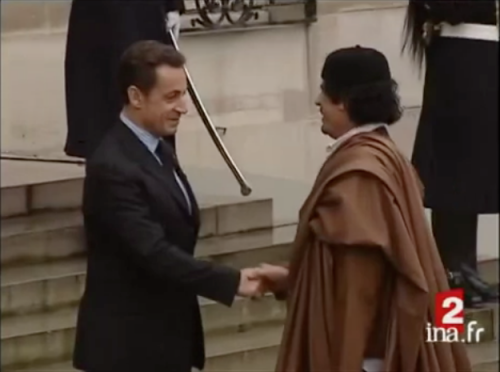 The document, Mediapart reports, was given to it by former high officials from Libya a few days ago and offered solid evidence of “illegal campaign financing” allegations.

Sarkozy  denied accusations when first questioned by French journalists in March. Sarkozy’s campaign spokesperson Nathalie Kosciusko-Morizet dismissed the latest report as “ridiculous” and a “clumsy diversion” staged by supporters of Francois Hollande, his Socialist opponent in the upcoming presidential election.

The document dated December 10, 2006, written in Arabic, was signed by Gaddafi’s intelligence chief Moussa Koussa, in which he authorizes the Chief of Staff of Gaddafi, Saleh Bashir, to undertake secret payments.

The document also refers to a meeting that allegedly took place on June 6, 2006, between Brice Hortefeux, Sarkozy’s close ally, and Ziad Takieddine, a Franco-Lebanese businessman who has been at the centre of a number of political scandals linked to Sarkozy and his inner circle, Aljazeera reported.

“The investigation will be difficult because many of those present were killed during the war in Libya, but it’s still important that this document should be made public,” Mediapart said citing Takieddine.

Sarkozy will be seeking re-election on May 6, going up against the Socialist candidate Francois Holland