Saudi Arabia a ‘champion’ in the battle against hunger – WFP 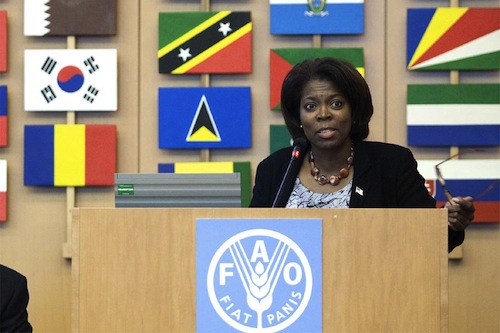 The head of the United Nations World Food Programme (WFP) paid tribute to the generosity of Saudi Arabia in helping the agency fight hunger and meet the food needs of millions of people.

“Our partnership with the Kingdom of Saudi Arabia has helped save millions of lives worldwide across decades of collaboration,” said WFP’s Executive Director, Ertharin Cousin, as she wrapped up a two-day visit to the Kingdom.

She noted that Saudi Arabia has been extremely generous to WFP with a historic pledge of $500 million to feed the millions of people affected by the food crisis that hit the world in 2008, the agency said in a news release.

During the visit, her first to the Gulf region since she assumed her position in April, Cousin met with the Crown Prince, Salman bin Abdulaziz Al Saud, who serves as Deputy Prime Minister and Minister of Defence.

She expressed her gratitude and appreciation for King Abdullah Bin Abdulaziz Al Saud, and for the generosity and the long-standing partnership between the country and WFP in fighting hunger around the world.

WFP honoured King Abdullah in 2009 for his generous support of the agency’s work with its highest award by naming him ‘Champion in the Battle Against Hunger.’

Saudi Arabia contributes over 4,000 metric tons of dates to WFP annually, in addition to responding to emergency funding appeals in troubled spots around the world. The agency has received over $1 billion from the Kingdom to fight hunger since the early 1960s.

Cousin also met with the Minister of Agriculture, Fahd Bin Abdulrahman Bin Sulaiman Balghunaim, and discussed with him shared interests in WFP’s response to emergencies in the region, and especially Yemen, Syria and the occupied Palestinian territory.

“The Kingdom of Saudi Arabia values the partnership that we have with WFP and we will continue to work together collaboratively so no child goes hungry across the globe,” said the Minister.