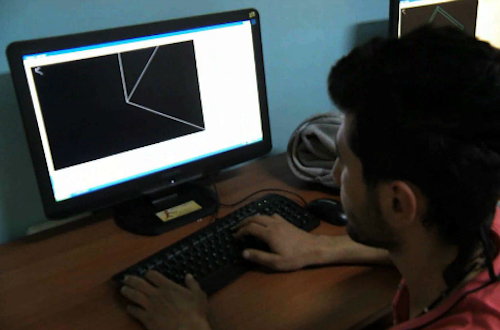 In an action targeting King Abdullah, Amnesty International yesterday urged the Saudi Arabian authorities to release immediately and unconditionally a website founder still detained and on trial one year after his arrest for expressing views online.

After founding “Saudi Arabian Liberals” – an online forum for political and social debate – Raif Badawi, 29, was charged last June with “setting up a website that undermines public security” and ridiculing Islamic religious figures. The prosecution had on the basis of this called for him to be tried for “apostasy”, which carries the death penalty in Saudi Arabia.

He has been detained for the past year in a prison in Briman, in the Saudi Arabian coastal city of Jeddah, after being arrested on 17 June 2012.

“One year on, Raif Badawi remains behind bars as his trial continues for the ‘crime’ of encouraging social debate online,” said Philip Luther, Director of Amnesty International’s Middle East and North Africa Programme.

“His detention shows the authorities’ contempt for online expression, and serves as a warning to the third of the Saudi Arabian population who are resorting to social media to express themselves, particularly if they are thinking of airing dissenting views.”

The charges against Raif Badawi relate to a number of articles he has written, including one about Valentine’s Day for which he is accused of ridiculing Saudi Arabia’s Commission on the Promotion of Virtue and Prevention of Vice.

One of his articles concluded:

“Congratulations to us for the Commission on the Promotion of Virtue for teaching us virtue and for its eagerness to ensure that all members of the Saudi public are among the people of paradise.”

The charges against the website founder also mention his failure to remove articles by other people on his website, including one that insinuates that Al-Imam Mohamed ibn Saud University had become “a den for terrorists”.

“Amnesty International considers Raif Badawi to be a prisoner of conscience and therefore calls for him to be released immediately and unconditionally,” said Philip Luther.

His trial began in June 2012 in the District Court in Jeddah, and was marred by irregularities there. According to his lawyer, the original trial judge was replaced by a judge who had advocated that Raif Badawi be punished for “apostasy”. His lawyer contested the judge’s impartiality in the case.

On 17 December, the District Court referred the case to the General Court in Jeddah, which five days later made Raif Badawi sign documents to enable his trial for “apostasy” to proceed.

“Raif Badawi’s trial has been an attempt to intimidate him and others who seek to engage in open debates about the issues that Saudi Arabians face in their daily lives,” said Philip Luther.

Over the past two years, the Saudi Arabian authorities have arrested several others for expressing online views deemed to be contrary to Islam.

Hamza Kashgari remains detained without charge or trial since he was extradited from Malaysia in February 2012, where he had fled after he wrote about the Prophet Muhammed on the social network Twitter.

The prominent writer and academic Turki al-Hamad was reportedly released without charge on 5 June after he was detained in December 2012 for tweets also deemed contrary to Islam.

Bloggers, critics and activists have been increasingly singled out for their online activism in the Gulf kingdom.

On 9 March 2013, the Saudi Civil and Political Rights Association (ACPRA) was required to shut down its social media accounts and disband. Two of ACPRA’s founders, Mohammad al-Qahtani and Dr Abdullah al-Hamid, were sentenced to 10 and 11 years’ imprisonment respectively. They submitted appeals against their sentences on 28 May.

Most human rights activists who have faced interrogations have been confronted with printouts of their online statements on Twitter and other social media, with security officials questioning them about the meaning and intentions.

Abdul Aziz al-Hussan, the main lawyer of al-Qahtani and al-Hamid, was interrogated shortly after he tweeted about visiting his clients in prison in March. Arriving at the al-Malaz prison in Riyadh on 11 March, he found the two men in handcuffs, which prison officials refused to remove. He decided to leave the country within 24 hours after being interrogated.