Posted on: November 18th, 2012 by AlYunaniya Staff No Comments 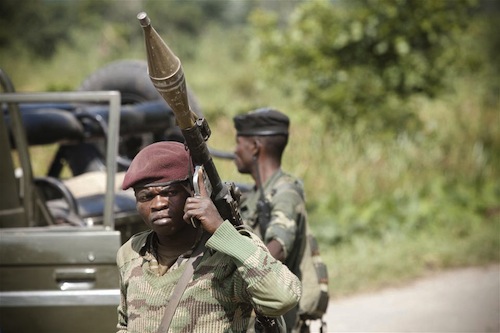 The Security Council, meeting in an emergency session on Saturday, strongly condemned the latest attacks by the M23 rebel group, which displaced more civilians in eastern Democratic Republic of the Congo (DRC) and prompted the United Nations peacekeeping force there to deploy attack helicopters to support the national army.

Early yesterday morning, the M23 – composed of soldiers who mutinied from the DRC national army (FARDC) in April – launched attacks in Kibumba, Mboga and Ruhondo hills in the province of North Kivu using heavy weapons, according to a news release issued by the UN Organization Stabilization Mission in DRC (MONUSCO).

In a statement read out to the press by Ambassador Hardeep Singh Puri of India, which holds the Council’s presidency for this month, the 15-member body expressed deep concern regarding the “rapidly deteriorating security and humanitarian crisis” in eastern DRC to due to ongoing military activities of the M23.

“The members of the Security Council strongly condemn the resumption of attacks by the M23 and demand their immediate cessation,” he stated, following a closed-door session in which members were briefed on the latest developments by the Under-Secretary-General for Peacekeeping Operations, Hervé Ladsous.

In line with its mandate to protect civilians, MONUSCO responded to today’s attacks by deploying its peacekeepers between the towns of Kibumba and Kibati and carried out 10 missions using attack helicopters.

It also secured the Kanyaruchinya site for internally displaced persons (IDPs), located about five kilometers from Kibati. The site, which already hosts more than 80,000 people, has received about 4,000 new arrivals since the outbreak of the fighting.

The Mission added that it is closely following the situation and will not tolerate any action by the M23 that would provoke panic among the civilian population and generate new displacement.

The peacekeepers have been aiding the national army in its efforts to deal with the M23 and various other rebel groups in the eastern provinces of North and South Kivu, which have witnessed increased fighting over recent months.