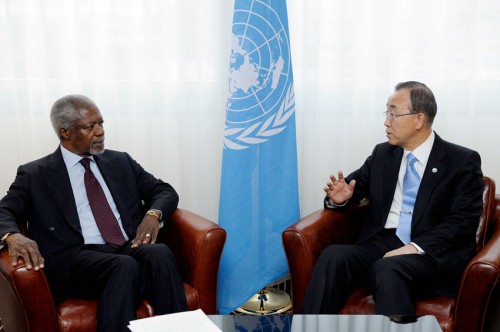 The U.N. Security Council is expected to vote Saturday on a draft resolution to send up to 300 unarmed military observers to Syria.

The draft also calls for Syrian regime’s immediate implementation of a six-point peace plan laid out by U.N.-Arab League special envoy Kofi Annan and calls for both the government and opposition to cease violence.

France’s U.N. Ambassador Gerard Araud said the text, negotiated over many hours, would be sent to capitals overnight for approval and the council would meet at 11 a.m. EDT Saturday for a vote.

Russia’s U.N. Ambassador Vitaly Churkin said, “I hope there’s going to be a unanimous vote tomorrow.” but U.S ambassador Susan Rice, said there is a possibility that not all 15 council members would agree to the draft or would have instructions from their government.

At least 3 people were killed in the besieged city of Homs on Saturday, the Local Coordination Committees of Syria said.

The Security Council previously approved the deployment of an advance team of 30 monitors meant to pave the way for a larger group of observers.

Russia which  along with China has blocked action against the Syrian regime called for the immediate approval of the Security Council resolution to deploy more monitors.

The United Nations estimates that at least 9,000 people have died since the protests began, while activist groups put the death toll at more than 11,000.

At present there are six monitors in Syria as part of an initial batch of 30 UN monitors which were suppose to arrive in the coming days. There continues to be much disagreement over exactly what authority the monitors will have.