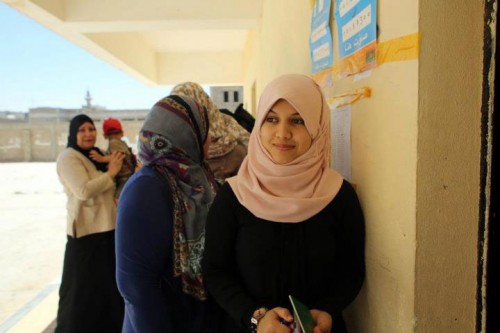 Twice a week, training specialist, Rania Shanti, visits a garment factory in the industrial city of Sahab, Jordan, and talks to small groups of workers about sexual harassment.

She tries to create a comfortable and – crucially – confidential atmosphere that will encourage participants to speak freely.

One of them is Indrani, a Sri Lankan woman who has worked at the factory since 2009.

“I always thought that when women spoke about being sexually harassed, they meant they were raped. Now I understand that sexual harassment can take place in many different forms,” she says.

Like Indrani, many of the workers at the factory are foreigners – mainly from Sri Lanka, India and Bangladesh. So, Shanti, from the ILO’s Better Work Jordan programme, often has to communicate through a translator.

“It’s difficult to assess sexual harassment in these factories due to the sensitive nature of the issue and fears of reprisals among workers. It’s never guaranteed that the workers will label themselves as being victims of sexual harassment,” she explains.

Two years ago, allegations were made of widespread rape being committed against workers at one of Jordan’s largest clothing factories. Although the allegations were not substantiated, reports of unwanted sexual advances towards workers are common across the global garment manufacturing sector.

Better Work Jordan’s own investigation found that many workers had very little understanding of what constitutes sexual harassment – even though they were concerned about it.

As a result, Better Work Jordan launched a pilot sexual harassment prevention awareness project with Indrani’s employer, the Jerash Garment and Fashion Manufacturing Company, which aims to teach line workers, managers and supervisors about how to identify, prevent and report instances of sexual harassment.

During one session held in mid-June, Indrani joined a group of shy and soft-spoken women, who told fellow workers about being groped, having their skirts lifted and even being sexually assaulted by taxi drivers.

Priyadorshani, another Sri Lankan worker at the factory, said the project helped them better understand Jordanian laws and regulations relating to sexual harassment in the workplace.

“We are foreigners in Jordan, so we do not know much about the laws, rules and procedures,” she said. “After the training, I now have a better idea of how to deal with the situation if something happens.”

Shanti notes that while some relevant laws exist, the most powerful and effective policies are those created and adopted internally by the factories, which address all forms of sexual harassment.

“Part of the training is to help the factories create their own policy on sexual harassment prevention. We share our model policy, which they can adapt,” she explains. “This has had a great impact on the factory’s management, as it has given them a great sense of responsibility where they now feel that they are in charge of the situation and can take control.”

“The training helped the managers and supervisors on issues which they were not aware of before, such as certain forms of sexual harassment and how to prevent it or deal with it. And following advice from the Better Work team, we have developed our own internal sexual harassment prevention policy for the factory which has been adopted by the management.”

Unions are also trying to play a role says Mervat Abdel Kareem al-Jamhawi, of the General Trade Union of Workers in Textile, Garment and Clothing.

“We try to raise awareness of the issues among female workers in factories but there are many challenges, such as cultural and language barriers. It is definitely a high priority for us and we need more support from projects like Better Work Jordan to conduct more programmes in a range of factories.”

Better Work Jordan plans to help create independent counseling and referral systems for workers who feel sexually harassed or under threat. The pilot project will also extend to several other factories next year – some of which employ up to 7,000 workers from as many as eight countries.

“We will continue with our training,” says Shanti. “We will continue to spread our message, especially to migrant workers, by telling them that they are not victims, they are not weak. They have come from Sri Lanka and Bangladesh and other parts of the world to work here, so they must be strong women,” she said. “They need to know that there are actions that can be taken. If they don’t want to talk to their managers about sexual harassment, they can talk to us.”