Posted on: November 3rd, 2012 by Romana Turina No Comments 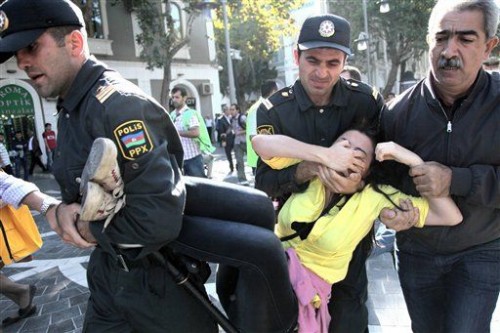 Freedom of expression seems to be very limited in Azerbaijan, the host of the upcoming United Nations-sponsored Internet Governance Forum (IGF). At least eight journalists and three human rights defenders are in jail, Human Rights Watch said in a briefing paper published today.

Among the journalists behind bars in Azerbaijan is Avaz Zeynalli, editor of Khural, a newspaper known for its tough criticism of public officials. Zeynalli’s reporting implicated in corruption a member of parliament from the ruling party who pressed dubious extortion charges against him. Zeynalli was arrested in October 2011 and is currently on trial.

The situation is unfortunate, especially since the Internet Government Forum is planned to take place in Baku from November 6 to 9, 2012; and this year’s theme is the role of Internet governance in promoting development. The annual meeting convened by the United Nations Secretary-General brings together governments, civil society, and others as equal partners to discuss public policy issues related to the Internet.

The international community expects to see formal convener of the Internet Governance Forum, UN Secretary-General Ban Ki-moon remind the Azerbaijan government of its human rights obligations, Gogia said. “The forum’s mandate includes strengthening civic engagement in Internet governance,” he continued, as “The best way for the Azerbaijani government to do this is by improving human rights.”

“The cases against Zeynalli sends chilling messages to journalists who dare to use media, including social media, to express their concerns about government actions,” Gogia said. “As a sign of commitment to the IGF’s human development focus, the government should release Zeynalli, and others who have been targeted for nothing else but speaking their minds.”

Azerbaijani authorities have also failed to hold accountable the people responsible for assaults and harassment against journalists. The briefing paper describes how Idrak Abbasov, a journalist for the Azerbaijani media watchdog Institute for Reporters’ Freedoms and Safety, was attacked in broad daylight by Azerbaijan State Oil Company (SOCAR) security guards when he was filming house demolitions. Abbasov lost consciousness and was hospitalized with multiple bruises.

Azerbaijani authorities limit freedom of expression in other ways, including by breaking up peaceful protests, often with violence, and arresting and sentencing peaceful protesters, organizers, or participants. Since early 2006, authorities have not authorized a single opposition protest in the centre of Baku. On October 20, 2012, police rounded up dozens of protesters in an unsanctioned rally in central Baku, forcing them into police cars and buses. Many were fined and released, but at least 13 were sentenced to up to 10 days of detention.

“With the 2012 Eurovision Song Contest in Baku in May, this is the second time in six months that Baku is hosting a major international event,” Gogia said. “The government shouldn’t just try to use those events to enhance its public image.”